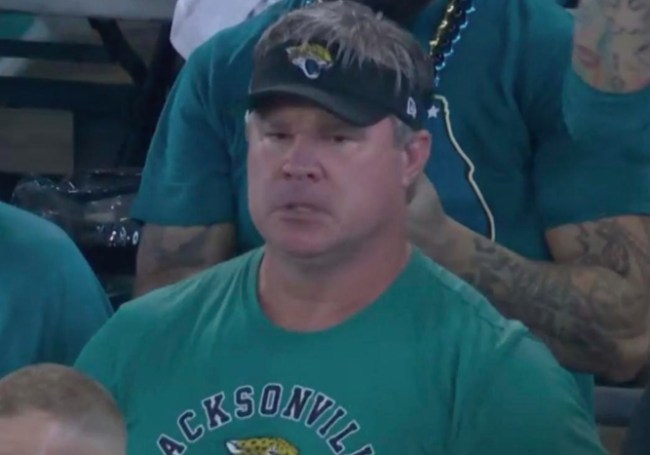 Last night, on national television with America watching, a star was born.

During Thursday Night Football’s Jags/Titans game, the cameras panned to a giant beefcake of a man who identifies himself as Flint Minshew, the father of America’s sweetheart and electric Jaguars quarterback, Gardner Minshew.

Gardner Minshew’s dad is a HS bully in an 80s movie pic.twitter.com/YRYDGBnVyb

Flint is a general contractor from Mississippi, but you might recognize him as the guy who is perpetually naked in the locker room of your local Planet Fitness. Flint looks like the dad who willingly let his son’s friends thumb through his extensive collection of Playboy magazines, which he insists he subscribes to for the articles, that are bookended by two coffee mugs shaped like giant tits that was given to him by his father who gave gag gifts so he didn’t have to learn any of his sons’ interests.

But, that’s just my take. The internet had theirs, and they are very compelling.

You know when you're taking a shit in a bathroom stall and some dude goes into the stall next to you and immediately starts ripping ass without any remorse? Gardner Minshew's dad looks like that type of guy.

Gardner Minshew’s dad looks like the counselor from Heavyweights if he got in shape pic.twitter.com/YeH2bimecM

PUT GARDNER MINSHEW’S DAD ON THE SIDELINE AND GIVE HIM A HEADSET AND A TIN OF COPENHAGEN. #Jaguars pic.twitter.com/4D5k8wHBXE

Gardner Minshew’s dad looks like Tom DeLonge in the early stages of transforming into the Hulk. pic.twitter.com/vagQCKFAwz

Gardner Minshew’s dad is Doug Pederson if he had an LA Fitness membership pic.twitter.com/BgjCDnunSY