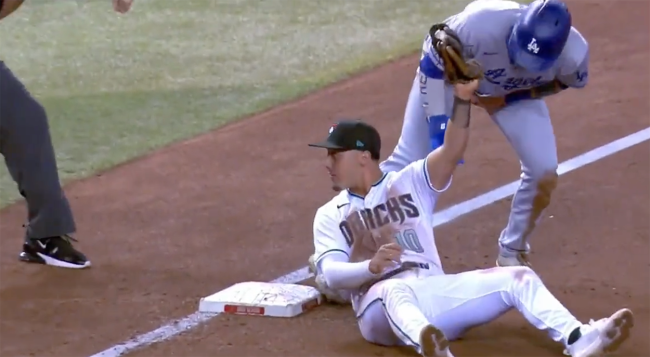 The Los Angeles Dodgers absolutely gobsmacked the Diamondbacks on Thursday night, beating them 14-1 on their own field. However, it was not such a great night for second baseman Gavin Lux.

Despite going 2-for-5 with a walk, the 24-year-old had the lowlight of the evening during the third inning.

With Lux taking a big lead off of first base, Mookie Betts knocked a blooper to the outfield that landed right in front of Arizona right fielder Jake McCarthy. After getting a great jump, Lux thought he had an opportunity to leg out an extra base and reach third before the throw.

That was not the case, at all.

McCarthy put the ball on a frozen rope to third baseman Josh Rojas, who tagged Lux for the out. He got hosed on a fantastic throw and never stood a chance.

To make matters worse, Rojas’ tag was not particularly comfortable. He swung his glove up to make the tag and clipped Lux right where the sun don’t shine.

So not only was Lux called out, but he had to take a moment to gather himself after getting hit in the groin. Tough.

Fortunately, the only way that it could have been more embarrassing was if the Dodgers lost and if Lux trying to leg it out to third was the reason. But it wasn’t, so now all he can do is laugh about the uncomfortable moment.