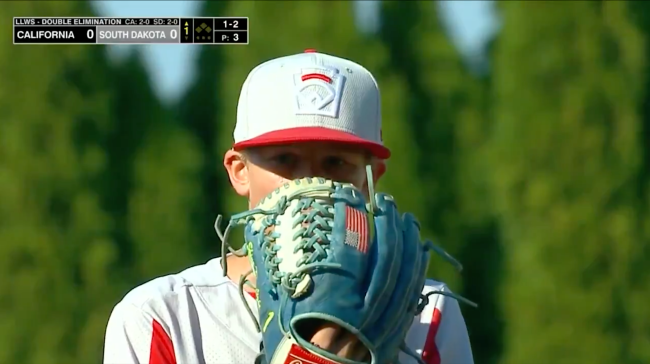 No, I am not related to Gavin Weir, but I wish I was because he is way cooler than I will ever be. The 12-year-old from Sioux Falls, South Dakota just completed the most dominant summer in Little League history and helped his team reach the Little League World Series semifinals.

Weir, who typically plays up with 14 year olds, just finished his fourth no-hitter in his last eight starts against 10 to 12 year olds. And he did so by striking out 14.

Gavin Weir struck out 14 to lock down a 1-0 win that vaults South Dakota's Sioux Falls Little League into the Tom Seaver bracket Championship at 12:30 ET Saturday on ABC. #LLWS pic.twitter.com/NpcApy4ZH4

Beyond his four no-hitters, he has allowed only one hit all summer.

ONE HIT! ALL SUMMER!

Let’s do that math for a second—

It’s not hard to see why, because his stuff is absolutely grotesque.

Hey Siri, what is filthy? pic.twitter.com/hlen3ZoFp2

Look at him put his head down after this pitch, as if he felt guilty for how nasty it is.

Just look at this breaking ball and try not to throw up.

If you aren’t sold that Weir is the truth (read: if you are certifiably insane), watch all 15 of his strikeouts against Louisiana earlier in the tournament and see if you come around.

As the world has taken note of Weir’s greatness, many people have drawn comparisons between the big 12-year-old and big leaguer Chris Sale.

Our friend Rob Friedman, aka Pitching Ninja, put the two side-by-side and showed just how identical their mechanics really are.

After each of his four no-hitters, Weir was pleased, but not satisfied. In each instance he said that he was proud of the way he pitched, but disappointed that he did not throw a perfect game.

As if Weir’s silky stuff on the mound wasn’t enough, he also has serious pop. When he wasn’t pitching against Oregon, he helped lift his team by sending a moonshot halfway up the hill.

Pending rain, the run is done.

Weir’s bat will be important from here on out. Because of COVID-19 concerns, international teams were not allowed to travel to the LLWS.

As a result, two teams from each region advanced to Williamsport. With Weir’s dominant Wednesday, South Dakota will advance to the “Tom Seaver bracket” finals— which is essentially the semifinals.

Should Sioux Falls win that game, it will advance to the LLWS championship on Sunday. However, they will have to do so without Weir on the bump.

Because of Little League rules that are geared toward protecting the kids’ arms, Weir cannot pitch for the rest of the tournament after exceeding the 65-pitch mark against California.

South Dakota’s coach had the opportunity to pull Weir with four batters remaining and have him available on Sunday, but he chose to let him finish out the no-hitter and the 1-0 win. It was an interesting decision that keeps the nation’s best little league pitcher from pitching in the Little League World Series championship.

Regardless of right or wrong, his speech to his team will make you want to run through a wall.

Speech of the tournament, hands down #LLWS pic.twitter.com/6NQ1sLkDhl

Unless there is a rainout day, that is. Should one of the games be postponed, and the championship game gets pushed to Monday (assuming that South Dakota gets there), Weir would be available.

Selfishly, I think there will be a lot of people — myself included — rooting for mother nature this weekend with hopes to see Weir close out the greatest run of all-time.