Gemi Bordelon, Wife Of Former LSU Player, ‘Gets The Gat’ With Football Team, Plunges The Internet Into Chaos 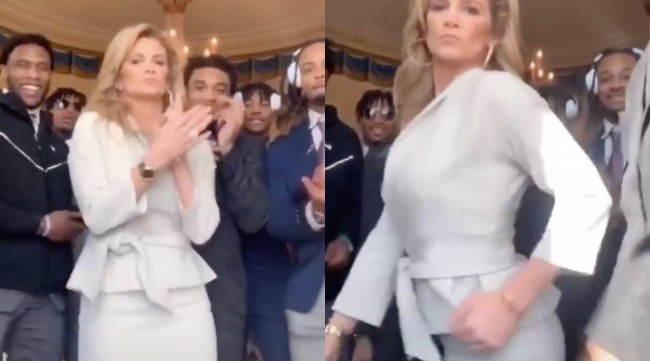 The Lousiana State University Tigers football is visiting the White House in Washington D.C. in honor of their National Championship victory on Monday night and set the internet on fire with a TikTok that features a still-unidentified, objectively good-looking middle-aged woman doing the “get the gat” dance with the team.

The dance, which Joe Burrow and the rest of the team was seen doing after the Tigers’ 42-25 victory over the Clemson Tigers, is accompanied by Lil Elt’s song “Get The Gat” (obviously).

Given that nobody has been able to identify the woman (at this moment, at least), odds are that she’s with the LSU team and not a staff member at the White House.

looks like LSU is having a good time at the White House 😂pic.twitter.com/DtKmr0HbaH

LSU’s National Championship victory has produced more off-the-field headlines than any title-winning team in recent memory — you know, other than the dirty cheating Houston Astros, that is.

Odell Beckham Jr. passed out cash, got escorted away from the band for harassing them to play “Neck”, slapped the ass of a police officer, and now has a warrant out for his arrest. Meanwhile, Joe Burrow is running around showing up to his Pardon My Take interview still hammered, rockin’ a hat that says “Big Dick Joe”, and straight-up admitted that Odell gave him some cash.

Now, on top of all of that, in the closing hours of the week on this quiet Friday afternoon, the team absolutely breaks the internet with this “Get The Gat” video. What a time to be a Tiger. God bless Coach O.