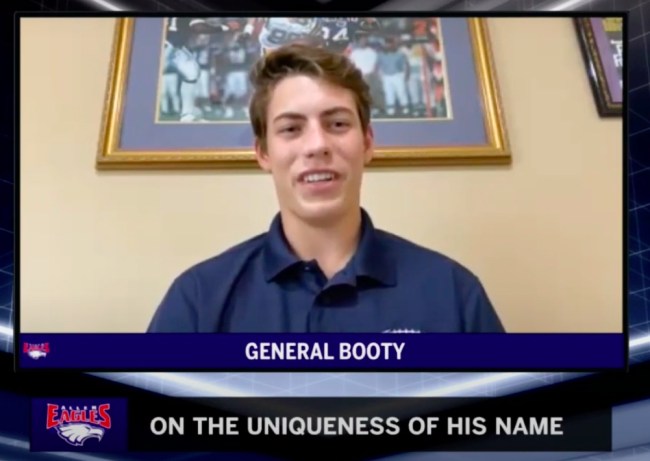 Wednesday marks the early signing period for high school football recruits to officially commit to the college programs of their choice, which gives a glimpse of the future for most college football fans. While we’ve seen some top recruits flip from one school to another, there’s one name that really stood out this year — General Booty — who’s a quarterback with a two-star rating from the state of Texas, per 247 Sports.

Now, most years, nobody would give a damn about a two-star recruit. Then again, most two-star recruits don’t have a name like General Booty, which, hands down, is one of the most unique and most bizarre athlete names any of us have ever seen. Like, on the all-time list of weird names, this has to be in the top-3, joining guys like Rusty Kuntz and Lucious Pusey in the Hall of Fame in that category.

Booty, who is related to former quarterbacks Josh Booty (LSU) and John David Booty (USC), who are his uncles, may not have snagged the blue chip program to play for, but he was fortunate enough to land the best name in the family. General, who officially committed to Liberty University, recently joined FOX Sports Southwest to talk shop, and, more importantly, explain the uniqueness of his name.

“Obviously my name’s an attention-grabber and people like to do headlines with it, but I like to show people with my play that I can back it up, too,” General said. “I have done that, I’m going to continue to do that as well, and give them a reason to remember my name.”

I want this kid as my quarterback, man. Anybody with a badass name like General Booty already gets my attention. But hearing him own it and talk about how he’s working on his game so that’s what people remember him for is A+ stuff. He’s got an inherent chip on his shoulder, so I’m officially part of the kid’s fan club.

For those wondering where the name actually comes from, the Dallas Morning News recently got the answer, so take a look below.

General’s grandfather, Johnny Booty, was one of the highest recruited quarterbacks in the country when he played at Woodlawn High School in Shreveport, Louisiana — the same school where NFL Hall of Famer Terry Bradshaw played before him. Johnny played at Arkansas and Mississippi State before settling back down in Shreveport. He coached all four of his sons in town, and they proved their father only set the standard for football success.

They figured they’d call him by his middle name, Axel, but early on he answered only to the name General.

“It’s almost like he chose his first name as a baby,” Amy recalled.

And with it, unknowingly, he chose a name that would be talked about on a national scale. In 2018 SB National, a collection of national sports blogs, wrote about him, claiming in the headline that he had “the greatest name ever.”

It’s also a name, Abram and his three brothers will tell you, is fitting.

Hands down, this kid has a top-10 athlete name of all-time, and here’s to hoping General Booty keeps tossing “booty-ful” passes on the football field to make a name for himself when all is said and done.