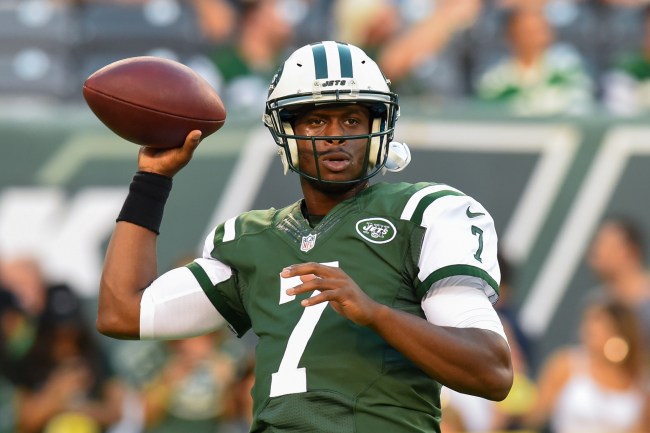 Backup NFL quarterback Geno Smith was on one Tuesday morning after an ESPN article detailed a locker room fight between he and one of his former teammates on the New York Jets, IK Enemkpali, which occurred all the way back in 2015. Now, I vaguely remember some of the reported details of the fight — because, you know, it was FIVE FUCKING YEARS AGO and the mind tends to move on!! — but, if you want a refresher, go ahead and read the ESPN piece written by Rich Cimini.

To summarize the fight, defensive end Enemkpali apparently sucker punched Geno Smith in the Jets’ locker room over a dispute that started over $600 after the quarterback flaked on a youth football camp hosted by the defender. After Cimini spoke with several players on the team at that time, they all came to a consensus: That Smith owed Enemkpali money after simply ignoring the promise he had made about showing up to the football camp.

After seeing the article about the 2015 fight resurface, Geno Smith voiced his displeasure on Twitter, absolutely tearing into ESPN and ripping the media as a whole; all while boasting about his bank account being healthy. Take a look below at the quarterback’s rant.

This what y’all posting? This what really happened? Hell no. Negativity sells in this world and lies go further than the truth. The devilish acts perpetuated in the media will never get old. It’s a shame what these people do for a story! https://t.co/esGO5mzNPF

You rats will never be honorable.

We got the real story! We gonna tell it when we ready! We got bigger fish to fry right now and best believe I’m here for a real reason. Where I’m from things could’ve gone left after that incident very fast. I chose to take a different route. That’s what a man does.

I woke up to more money in my account and my baby smiling. I’m living a life only few can imagine. God been fighting my battles. These cowards will never win.

These media outlets instigate. They paint the picture of a successful black man in this negative light. It’s almost like there’s some sort of agenda. I haven’t played for the Jets in 4 years.

Picture me letting these clowns nitpick at me.. paint me like a pickanny.. man I will LITERALLY kiss lil 7 in the forehead.. tell him plz forgive me and…

Let’s talk about ESPN being owned by Walt Disney who made a killing off putting toons in black face. Soliciting violence in all the cartoons.

Considering this fight is being written about FIVE YEARS LATER, it’s only natural for Geno Smith to be a little pissed off about it. Likewise, IK Enemkpali seemed unhappy with the published piece, too, messaging ESPN on Facebook by asking, “What’s the point of bringing it back up? What’s your motive?”

Both guys have seemed to move on, so it’s a little strange that a longtime writer like Rich Cimini would dig so deep and waste so much effort on something that nobody cares about. Regardless, with Smith claiming he’ll tell the real story when he’s ready, if he ever actually does so, it’ll be interesting to see how it differs from the reports.

This isn’t the first time Geno Smith has gone on a Twitter tirade in the past few months, as the quarterback also burned former head coach Rex Ryan over some disparaging comments made on, surprise, and ESPN show. Something tells me Geno’s not much of a fan of the Worldwide Leader in Sports; but that’s just a hunch.