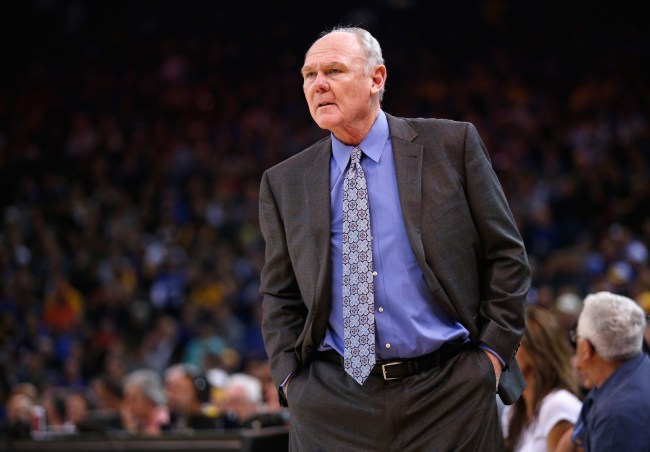 George Karl still hates Mark Jackson after all these years.

During Thursday night’s Lakers-Blazers game, Jackson took a subtle shot at Karl while talking about Carmelo Anthony’s improved defense this year. According to Jackson, Anthony’s poor defensive effort in the past could be partially attributed to coaches who allowed him to play that way.

Karl, who coached Anthony whhen he played for the Nuggets, took offense to Jackson’s comments and blasted the former Golden State Warriors coach on Twitter.

I heard @MarkJackson13 is taking shots at my defensive coaching during tonight’s broadcast.

Remind me, how many all-star teams did you coach, Mark? How many DPOYs? How many Finals appearances? How many of my teams became dynasties right after I left?

Here are Mark Jackson's comments that set off George Karl, he said there should be a "shared responsibility" for anyone who "allowed" Carmelo Anthony to play bad defense in the past https://t.co/0EjzuP8P5D pic.twitter.com/xo0gLcOjD5

Wasn’t even thinking of u!
Btw I never lost to u in the playoffs as a Player or as a Coach! God Bless u and urs! https://t.co/MdIPN7Z26H

Karl has a long history with Jackson. Back in 2013 Karl accused his former player Andre Iguodala of working as a mole for Jackson during the Nuggets-Warriors 2013 playoff series

Kawakami: “Did you have any issue with Iguodala being close to the Warriors and then he ends up signing with the Warriors — is that an issue in your mind at all?”

Karl: “Yeah. I don’t know what the real story is, but there were things there that we saw in film. There was something with Mark Jackson and him that was fishy. Had a bad odor to it. It was negative energy.

“The team gradually figured it out that Iggy was kind of favoring Golden State’s Jackson. His comments were a little bit irregular. But Iggy played well in that series. He played very well for us.”