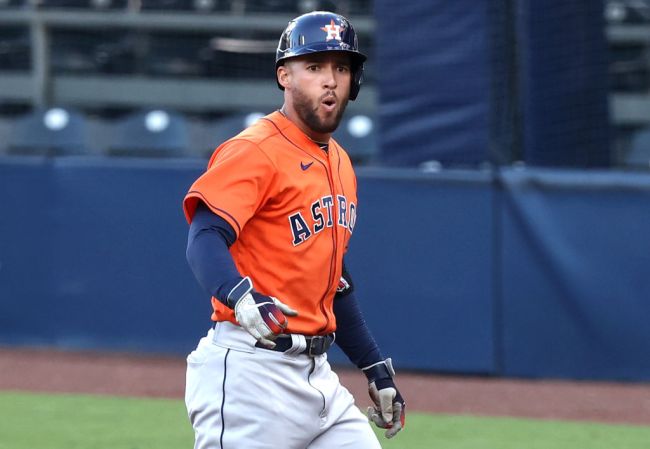 The Blue Jays just paid a whole lot of money to George Springer. ESPN’s Jeff Passan is reporting that the three-time all-star agreed to terms with Toronto and and it sounds like he will be there for the foreseeable future. MLB Network’s Jon Heyman reported that the deal is for $150 million over six years.

George Springer’s deal with the Toronto Blue Jays is for six years and $150 million, as @JonHeyman said. In this market, that is a massive deal. Toronto paid a premium price for a premium player.

Springer is set to become the 40th highest-paid player in Major League Baseball history and the 23rd highest-paid active player. The 31-year-old has knocked in 128 runs and hit 53 home runs since 2019 while maintaining a .284 batting average. He was a crucial component in the Astros’ 2017 World Series Championship team(*) and joins a potent lineup in the Great White North. He became only the third player to ever hit five home runs in a single World Series with dingers in Games 2, 4, 5, 6, and 7.

I think that we can all be in agreement that the Blue Jays just got a lot better by signing George Springer pic.twitter.com/up4HkaSN0I

His decision came down to the Jays and the Mets, ultimately deciding to remain in the American League. New York was reported to have made a strong push for the Connecticut native down the stretch, but he will instead join a very powerful team that is bound to blossom. Toronto’s average player age in 2020 was 27.4 years old and Springer will be the older veteran who might be able to anchor a lineup. The Blue Jays have a veteran pitcher in Hyun-jin Ryu, who signed with the team in 2019. It is potentially a perfect pairing. Getting their ace was a move in the right direction for a franchise that has been a basement dweller in the AL East for some time, and getting their bat is hitting the gas.

This is what it’s like facing Hyun Jin Ryu 😳 pic.twitter.com/iP9wXvU8kY

Bo Bichette, Vladimir Guerrero Jr., Cavan Biggio are at the top of the order and Nate Pearson toes the rubber. All four players are the future of a team and the belief in the front office is that there is potential to compete with the Rays and the Yankees for the division sooner than later. This move speaks to that notion. Here are some highlights of who Springer will be joining:

Biggio + Bichette turning into quite the double play duo. pic.twitter.com/VKtt5YY7rF

Here are some highlights of Springer:

🔥 Fun fact: George Springer hit a home run off of a 99 mph fastball from Tyler Glasnow in the ALCS. He is now a Toronto Blue Jay.#BlueJays | @JaysJournal pic.twitter.com/aKU6OEFdpW

This is from George Springer's last game at Minute Maid Park.

Seems like it could be a pretty dangerous situation brewing in Toronto, doesn’t it?