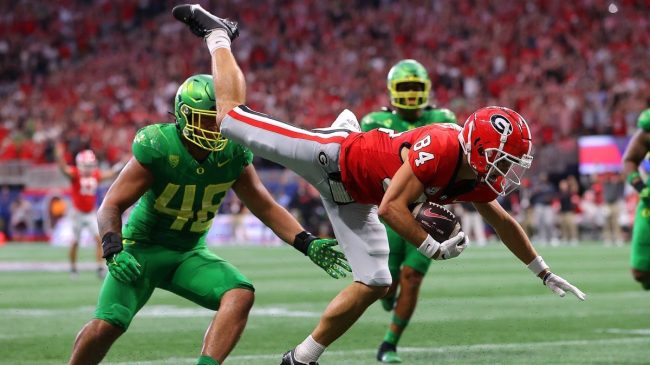 The Georgia Bulldogs football team doesn’t have too much to complain about these days. Georgia is coming off its first national title since 1980 and is in line to contend for another this year.

The Bulldogs started their defense strongly against Pac-12 foe Oregon. Georgia came into the game as significant, 16-point favorites. But the game was never even that close. Kirby Smart’s side took a 28-3 lead into the break and currently leads 42-3 late in the third quarter.

Defensive tackle Jalen Carter looks every bit the projected top-five NFL Draft pick that he is, and quarterback Stetson Bennett could be a sleeper Heisman Trophy contender.

Everything is perfect in the Bulldogs’ world. That is, except for one player.

Redshirt sophomore wide receiver Ladd McConkey is a Georgia native who was the 1,160th ranked player in the 2020 recruiting class according to 247Sports’ composite rankings. He was the third-lowest rate recruit in a class that ranked No. 1 in the country.

But that hasn’t kept him from making an impact for the Bulldogs.

McConkey balled out for Georgia against the Ducks, catching five passes for 73 yards through three quarters. He caught the first touchdown of the game to put the Bulldogs ahead and they never looked back.

Ladd McConkey breaks the LB’s ankles in space, then turns on the jets to find the end zone!

Georgia leads Oregon by a touchdown early on in Eugene #GoDawgs

But that’s not keeping fans from getting jokes off about his, we’ll call it unconventional name.

Ladd McConkey sounds like a horse that lost the Kentucky Derby but won our hearts.

It’s Ladd McConkey’s Brooks Brothers outlet, the rest of us are just shopping in it.

Ladd McConkey's is on 2nd Avenue in the East Village and only serves fish bowls and tater tots https://t.co/WMJ23LCIbU

A team composed almost entirely of future NFL players alongside several dudes with weird names that look like they just walked out of the Vineyard Vines store.

You have 6’7” 270 lb Darnell Washington playing next to a dude named Ladd McConkey. pic.twitter.com/nMdPKF4igR

McConkey’s full name is actually Andrew Ladd McConkey. But we prefer it this way. Football fans are laughing now, but McConkey will have the last laugh when he’s catching 100 balls for Bill Belichick next year.

Never let anyone tell you what you can or can’t do, kids.