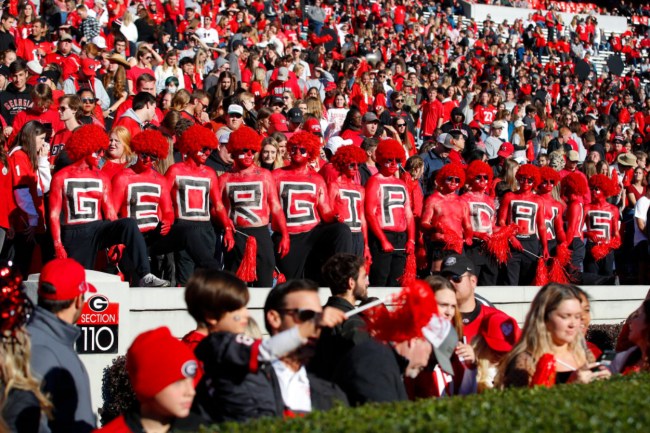 Georgia football players aren’t the only ones preparing for their matchup against Michigan in the College Football Playoff, Bulldog fans are getting ready as well. In fact, they’re copying a longstanding tradition from the Wolverines’ biggest rival, Ohio State.

The UGA Spike Squad, the well-known student fan group that wears shoulder pads with spikes attached, has adopted the Buckeyes’ tradition of crossing out the letter ‘M’ from every word on campus that contains it.

Georgia fans have been going around campus in Athens and crossing out the letter ‘M’ with red X’s.

The Georgia Spike Squad didn’t just randomly decide to copy Ohio State’s tradition, that would be distasteful. According to The Columbus Dispatch, the group reached out to  The Block O, Ohio State’s student fan group to seek its approval.

“We decided the best way to move on (from the loss against Alabama) was to focus on Michigan and we thought it would be cool if we changed out the M’s on campus to X’s like Ohio State does,” the Spike Squad said.

“We reached out to The Block O to see if we could do this without stepping on any toes because we understand this is a big tradition.”

Obviously Ohio State fans were on board with Georgia fans bashing Michigan in any way possible. Every Ohio State fan around the country will be Bulldog fans when Georgia squares off against Michigan.