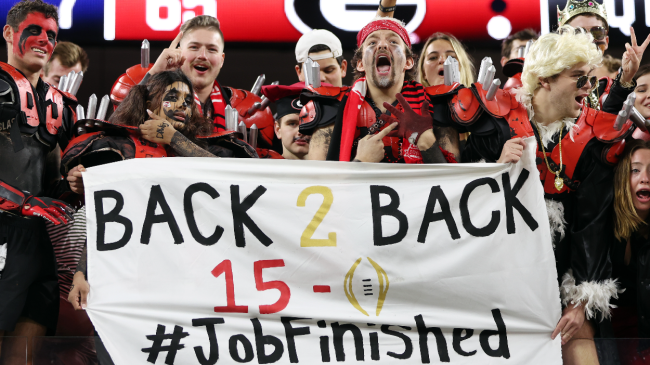 Georgia fans are going viral for their postgame celebrations following the national championship game. Bulldog fans were seen chanting on their flights home, leading to reactions of irritation from opposing fanbases.

Videos of the plane rides are now making their way around social media, with most being thankful that they weren’t onboard.

“Calling the Dawgs” is tradition in Athens. The chant can be heard at the pregame tailgate, the postgame festivities, and any time in between. I’ve heard it one too many times living in the great state of South Carolina.

“Who’s that comin’ down the track? It’s a mean machine in red and black. Ain’t nothing finer in the land, than a drunk obnoxious Georgia fan.”

At least they know how obnoxious they can be.

While it may be tradition to some, it’s an annoyance to most others. Much like “Rocky Top,” cowbells, or “Pig Sooie,” not many outside the fanbase enjoy hearing the nauseating tune while watching a game.

So, imagine being trapped on a plane, forced to hear 40 rows of boastful Bulldog fans screaming the song at the top of their lungs. Hell on Earth.

That’s what happened on Tuesday as fans made their way home from Los Angeles.

I’m on a full flight in St.Louis heading to #Atlanta and before we took off this fan jumped up to start the Dawgs chants. #godawgs #CFBNationalChampionship pic.twitter.com/DdCLyPaezR

Here’s another angle of the fan leading the call. I feel for any wounded TCU fans aboard trying to quietly make their ways back home after that disaster of a game. Luckily, there probably aren’t too many Horned Frogs living in UGA Country.

Georgia fans calling the dawgs on the way back home.

“Ain’t nothing finer in the land than back to back natty fans” pic.twitter.com/pCxFsFtF96

The videos caused quite the response from folks on the internet. Here’s what they had to say.

One person wrote, “I would open the emergency exit door immediately and jump out,” after seeing the clips.

Another commented, “That’s the last place I would want to be.” I completely agree.

POV: you’re hungover af on a plane from LA to Atlanta for work

Georgia fans are enjoying the moment after another national championship. Kirby Smart will look to make it a three-peat in 2023 with the Bulldogs being the early betting favorites to win it all.

Just keep these videos in mind if you happen to be on the opposing end in next year’s title matchup, and plan on making the trip.