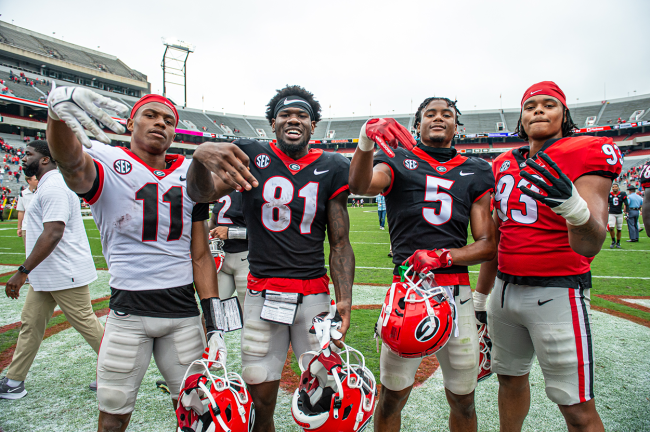 Georgia football is coming off of a national championship season and has hopes of getting back to the College Football Playoff in 2022. As the Bulldogs embark on their quest to repeat, they will be rocking new jerseys.

No, Georgia is not making sweeping changes to its classic uniforms. No, it is not re-introducing its alternate jerseys from a few years back.

Actually, the Bulldogs are barely changing anything at all. They announced on Thursday that they are making an extremely minor change to the jersey numbers, but it makes a world of difference. The uniforms already look so much better.

Over the past few years, Georgia has worn jerseys with numbers that are rounded off. It is a small detail that undeniably stands out because most of the rest of the country wore and wears jerseys that have more square, rigid numbers.

Here is an example of the numbers that the round Bulldogs have worn on their jerseys in the past, as recently as their spring game:

Take extra note of the round, smooth edges to the number eights and the number zero. That will be no longer.

In an announcement that was spearheaded by ESPN College GameDay analyst and Georgia football legend David Pollack, the school announced its return to block letters.

Notice the clear difference in the zero:

The block letters are pretty standard across college football, but Georgia has gone against the norm for quite a few years now. That is set to change this fall, which is interesting because if you’re trying to repeat as national champions— wouldn’t you want to keep everything the same? Just for superstition sake?