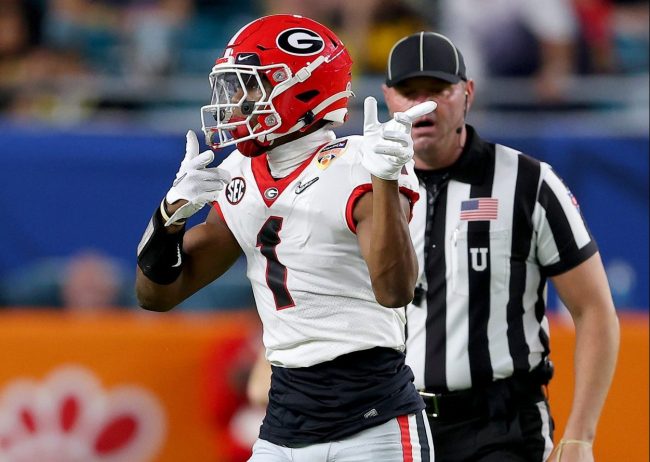 Michigan football never stood a chance against Georgia in the College Football Playoff. After going more than 55 minutes with only three points, the Wolverines added a touchdown and a two-point conversion to make it a 23-point loss, rather than a 31-point loss.

No matter how you spin it, the Bulldogs beat down their Big Ten challengers. It wasn’t even close.

To perfectly encompass how brutal it was for Michigan, a violent sequence from the fourth quarter perfectly sums it up.

Georgia’s junior wide receiver George Pickens tore his ACL in the spring and missed much of the season. He became a medical marvel with his rehabilitation and returned to the field in a limited capacity in late November.

Although he has recorded only four catches on the season, he provided the most savage moment of the year for the Bulldogs on Saturday.

Late in the fourth quarter, with a 24-point lead, Pickens lined up on the numbers next to the Michigan sideline across from cornerback Daxton Hill. Prior to the snap, he looked over to the Wolverines, put his finger to his mouth and shushed them.

When the ball was snapped, the 6-foot-3, 200-pound receiver reared back, came forward at full-speed and absolutely demolished Hill. He threw him a solid three yards onto his back.

After bodying their corner, Pickens turned back toward Michigan’s sideline and shushed them again, before turning to the ground and doing the same to Hill.

The Bulldogs proceeded to score on the drive and went on to advance to the College Football National Championship game against Alabama. It would be hard to imagine Pickens doing something similar against the Crimson Tide secondary, but he made it very clear that the Big Ten just isn’t comparable to the athletes in the SEC.