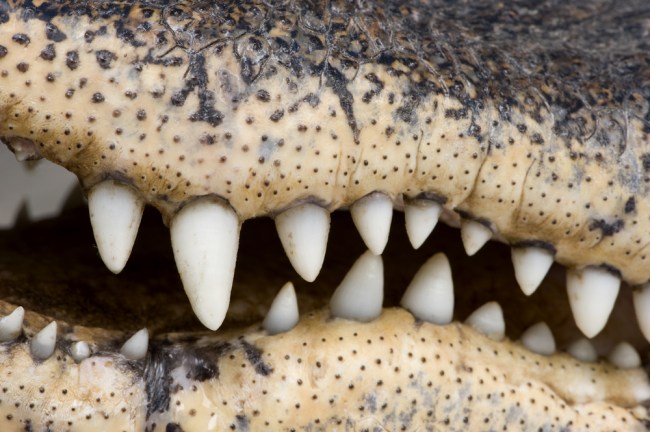 It’s Alligator Hunting/Fishing season throughout much of the South and a father-daughter duo in Georgia just landed themselves in the state records books after bagging a dinosaur. The 14-foot, 700-pound alligator was caught on Lake Eufaula in Quitman County which is just over the border from Alabama.

While the state of Georgia doesn’t maintain an official ‘record’ system for the largest alligator from their hunting season, they have been keeping track of catches since 2003 and this was the biggest gator caught to date.

In total, it measured 14-feet and 3/4 of an inch. The previous biggest gator was a 14-footer caught in 2015. So in a game of inches (fractions of inches?), this catch demolished that previous record.

Derrick and (daughter) Shelby Snelson were fishing for alligators during Georgia’s open hunting season and this was Shelby’s very first gator trip. I think it’s safe to say that (1) she’s hooked on the sport and (2) she’ll probably never break her own record.

The father-daughter duo were fishing with Lethal Guide Service who shared these images on social media of the new state record alligator:

😊 NEW GA STATE RECORD GATOR!! John and I set out to catch the state record gator 5 years ago and we knocked it out!!!Congrats to tag holder Derrick Snelson on his trophy!! This guy officially measured 14’1 3/4” #gotlethal #inthebooks

For comparison, the largest alligator ever caught and recorded in the state of Florida measured 17-feet-5-inches and the largest one ever caught in Louisiana totaled an almost unfathomable 19-feet-3-inches. When these alligators are left in the wild to grow wit an abundant food source on hand they can get BIG and live for an insanely long time.

According to WSB-TV, it took a 5-person crew more than 5-hours to haul in this monstrous alligator. They told the AJC this gator “was pulling us around all over the water at his leisure.”

After 5+ hours battling this 700-pound alligator in a match of tug-of-war they finally took it down and had it certified by the Georgia Department of Natural Resources (GDNR) who took official measurements and found the alligator’s full length of 14-feet-3/4 inches which is the largest ever recorded in the state of Georgia (officially).

According to Fox News the dad already has grand plans for this alligator. He says “We’ll have it ‘life-size’ mounted. I guess I’ll have to build a house around it,” the Greenville man told WSB-TV. “It’s going to be a monster lying on the living room floor for a while!”

To all the haters on social media, the dad told WSB-TV that hunting and fishing rank just behind ‘God and Country’ to him. Which leads me to believe that all of the ‘killer!’ comments on Instagram are falling on the deafest of ears.

The hunting season for alligators in Georgia runs the latter half of August through the first part of October and hunters are limited to a permit with a bag-limit of just one alligator.