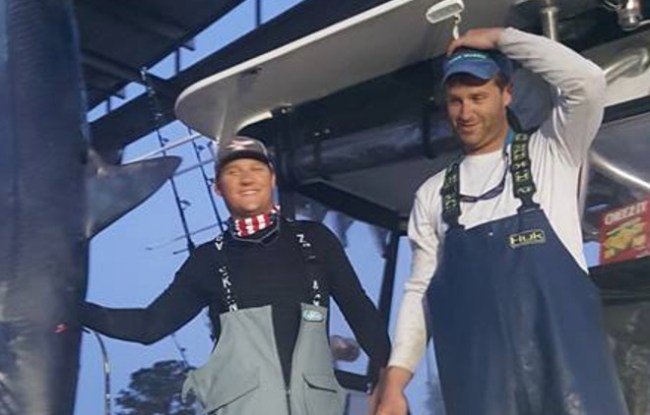 A group of fishermen just demolished the mako shark state record in Georgia. The previous shortfin mako shark record for the state of Georgia had held firm at 228-pounds since 1975, but the crew of ‘Team Vindicator’ nearly DOUBLED that record by hauling in a 440-pound mako.

The crew landed this ‘once in a lifetime’ shark while fishing last Wednesday (April 26th) off the coast of Bryan County, Georgia, the region just south of Savannah. According to IslandPacket.com, this is actually Team Vindicator‘s second state fishing record.

Almost a year ago to the day (April 30, 2016), the crew set the state Blackfin Tuna record when they pulled in a 40-pound 8-ounce fish. If you’re not familiar with Blackfin Tuna they are smaller than their better known Bluefin and Yellowfin brethren, but they fight like hell, and a 40-pound Blackfin would turn your forearms into Play-Doh.

As I mentioned in the headline, there is some pretty barbaric footage of this Georgia state record mako shark being caught. In it, you can see the crew gaffing the shark and attempting to subdue it by using a shortened bat. If you’re not into seeing a little man-on-shark violence then this probably isn’t the video for you:

Here are some photos that were taken at the dock while weighing this state record mako shark:

You can check out more photos of this state record shark on Team Vindicator’s Facebook page. They also take charters out, so if any of you Georgia bros are looking to catch the shark of a lifetime you should click on over to their page!