Georgia State Lineman Admirably Sacrifices Himself For The Team, Sets Up The Perfect Powerade Bath 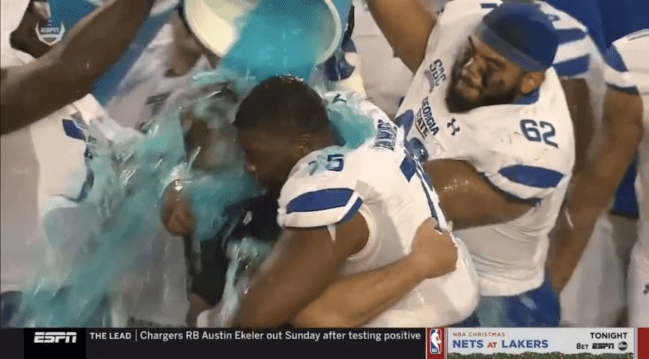 Don’t tell Georgia State football that bowl games don’t matter. The Panthers, who finished the regular season at 7-5, won Saturday’s Camellia Bowl and celebrated by dousing their coach with a celebratory victory bath.

It wasn’t french fries, nor was it smoothies, but it was a tremendous showing. The cooler dump absolutely soaked their coach and it was in large part because of a player’s willingness to sacrifice himself for the cause.

Georgia State won the Christmas Day Camellia Bowl in dominant fashion. Facing the 6-6 Ball State Cardinals, the Panthers took a 20-13 lead at halftime and then pulled away with a massive, 28-point third quarter.

After winning the game 51-20, sixth-year senior Shamarious Gilmore went to give head coach Shawn Elliott a big ole bear hug. In the process, Gilmore managed to turn Elliott away from what was coming.

As Gilmore wrapped his coach up and held him tight, redshirt senior Malik Sumter and redshirt junior Travis Glover snuck up behind them and dumped blue Powerade directly atop Elliott’s head. He was SOAKED, and as was Gilmore.

It was a perfectly-executed victory bath that should be shown to all future generations. That is how you do it right there.

All three players involved with the antics have been with the program a long time. To win eight games as upperclassmen meant a lot. Thus, celebrating a bowl win on Christmas Day by drenching their coach was the perfect way for it to go down. The sheer dedication displayed by Gilmore is admirable.