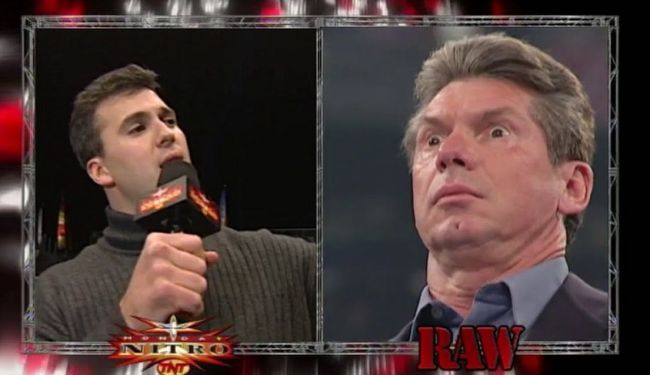 It’s hard to wrap my head around the fact that WWE purchased WCW almost 20 years ago.

I still recall watching both WCW Monday Nitro and WWE Raw in March 2001 hoping the entire situation was just an angle and the two companies found a way to work together or all the rumors were just fabricated to get more people to watch the dying brand.

Former WWE executive Gerald Briscoe had a front-row seat for the WWE takeover.

Briscoe, Bruce Prichard, and Shane McMahon were sent by the company to Florida for the final show. McMahon would appear on camera announcing the acquisition, pretending to be the sole owner of WCW to start a war with his father and the WWE.

Briscoe recalls being ready for anything that night, especially if some wrestlers or WCW officials decided to go into business for themselves against the trio.

“We’re getting ready to do the deal with Shane where Shane bought WCW. We’re cutting in. I was running Gorilla, and they needed somebody there to make sure that Shane wasn’t going to get shorted on the time somehow mysteriously,” Briscoe told Wrestling Inc. Daily.

“It was the three of us, Bruce Prichard, myself, and Shane and a guy in the TV truck. Everybody made a plug during that day, and it was intense, to say the least. Like I said, one of the most stressful duties that I ever performed in WWE, even more so than Montreal.”

Briscoe is making reference to his role in the “Montreal Screwjob.”

Briscoe said everything went according to plan but the evening was a roller coaster of emotions. On one hand, he was happy about the purchase of WCW but most of the company was in the dark about exactly what happens next. Most men feared for their jobs.

“Those guys were completely professional on the transition, and I didn’t think anything would happen, but I was pleased to be there. So of course, when the show was over, it had been a highly, extremely uncomfortable day, and a day where the stress level was just sky-high.

There are guys crying they’ve lost their job. They’re begging, and they’re yelling. You don’t like to see stuff like that, especially when we’re not too long ago, you were those guys in the exact same positions.

You had the emotion for them, but also on that same deal, the tremendous accomplishment that we just pulled off.”

After Briscoe, Prichard, and McMahon left the building and boarded the private WWE plane, the night turned to pure celebration. A celebration that ended by emptying Vince McMahon‘s private stash of wine.

“We got on the plane, and we rushed because we were in the panhandle of Florida. We had to go, I believe it was, to Cleveland to pick up Vince and the rest of the crew that was doing RAW and then take the plane and go over to Chicago.

Well, we knew Vince kept his wine, that is special. It’s Vince’s wine that he loved, so we got on a plane.

We didn’t have time to stop and get our own refreshments because we knew the plane had them, but we didn’t know we were going to be drinking this wine. So Shane, Bruce and myself, we can consume some adult beverages.

So anyway, we got on a plane. We consumed our lot. Then all of a sudden, we’re thirsty, and we’re still about an hour from Cleveland.

And Shane said, ‘That old man’s got his wine here,’ and so we asked a flight attendant, ‘No, that’s Mr. McMahon’s wine.’

Pop, pop, pop. So we’re all drinking and toasting each other, having a hell of a time. We ask for another drink.

All of Mr. McMahon’s wine’s gone too. Now we know we’re in trouble because he’s gonna get on the plane, and he’s gonna be happy and celebrating.

And there ain’t nothing to celebrate with.

Briscoe said it turned into a celebration and night he’ll never forget but the trio “got grief all day long and all night long for drinking the boss’ wine.”

Listen to the entire interview over at