Gerrit Cole Shaved His Beard For His Yankees Press Conference, Looks Like A Totally Different Guy 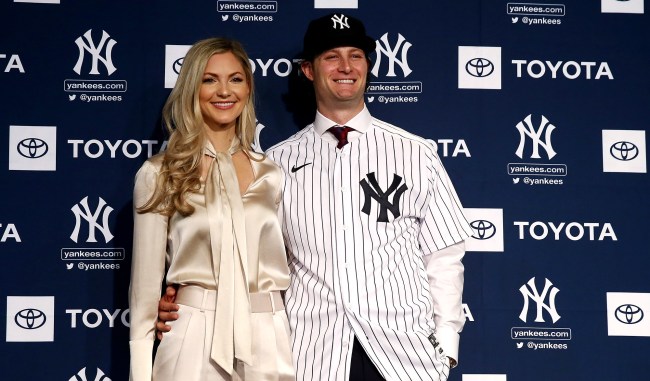 Ace starting pitcher Gerrit Cole made his first official appearance for the New York Yankees on Wednesday after signing with the team for a record-setting $324 million.

After saying that he would indeed be shaving his trademark beard due to the Yankees’ odd policy of no facial hair, Cole showed up to his introductory press conference with his wife, Amy, the sister of San Francisco shortstop Brandon Crawford, clean-shaven and looking like a new man.

For $324 million, I’d shave my whole body and every member of my family’s body.

During the press conference, Cole said he chose the Yankees because, “It was my dream. I had a second opportunity to chase it.”

He also added that he “experienced razor burn now for the first time in the last 10 years,” referring to having to shave his beard.

Gerrit Cole looks like he spent $399 for a haircut and shave at a salon and left a $1 tip. pic.twitter.com/Cua3slFFqi

They have Gerrit Cole looking like he sells encyclopedias door to door. Someone should just say no, I am not going to do it and if that is a problem I will go sign with Red Sox or Dodgers pic.twitter.com/DPdYeQx4PC

Cole without a beard looks like a 1987-era WCW jobber. Dick Murdoch beat him in a house show just after he turned heel again. https://t.co/1gFILmSspU

Cole will continue to wear number 45, the number first baseman Luke Voit had been wearing on his jersey. Voit tweeted that he was changing to number 59 in honor of his brother, who wore the number when he played football at West Point.

I’m going to wear #59 to honor my brother! It was his college football number at West Point while he was the captain of the football team!