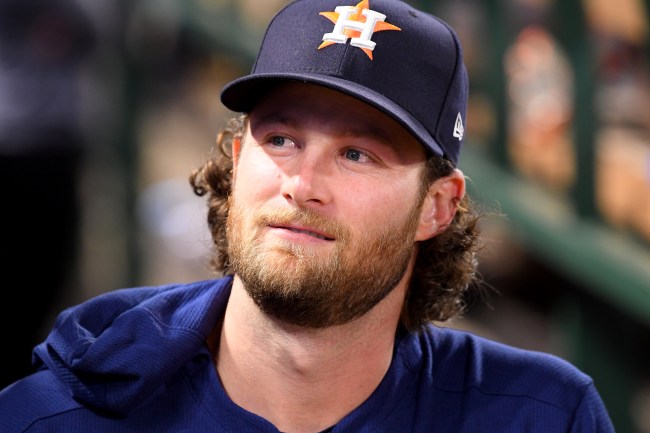 Gerrit Cole has finally stepped out in NYC. After signing with the New York Yankees for a record $324 million and becoming the highest-paid pitcher in MLB history, Gerrit Cole was bombarded by fans and press in front of the Mandarin Hotel in NYC’s Columbus Circle.

He seemed to take the crowd swarming him in stride and he spent time signing autographs for kids while answering rapid-fire questions from TMZ and whatever other press were there shoving cameras and microphones in his face, it’s unclear exactly who else was there.

The reporter from TMZ asked Gerrit if he was excited to be in NYC, to wear the Yankees‘ iconic pinstripes, and what the future of Gerrit Cole’s beard was. As you might know, the New York Yankees have a very strict facial hair policy for their staff that was enstated back in 1973 by then-owner George Steinbrenner. This is what the official policy states:

“All players, coaches and male executives are forbidden to display any facial hair other than mustaches (except for religious reasons), and scalp hair may not be grown below the collar. Long sideburns and ‘mutton chops’ are not specifically banned.”

Gerrit Cole, the best pitcher in baseball, rocks a clean-cut beard. But the Yankees just paid him $324 million so if they want him to cut the beard then dammit, he’s going to cut the beard. At least according to this short clip from TMZ where he says it’s ‘unfortunate’ that the beard will go:

It’s loud and kind of hard to hear his answer with all the cameras clicking but according to TMZ, this is what was said: “”That’s nuts,” Cole said … before saying he would “unfortunately” part ways with his face-warmer.”

He also briefly touched on how he’s excited for “The history. The fans. Competitiveness.” when joining the New York Yankees, the most successful team in MLB history.

From an outsider’s perspective, it’s interesting to see him just put his head down and try to rapid-fire sign as many autographs as possible to please the fans while multi-tasking and speaking to the press. The appearance here is that he’s trying to please everybody. That can certainly work in the short term but that won’t fly all day, every day. But the media circus will also slow down for the next few months before Spring Break so he’ll get a break throughout the Winter.