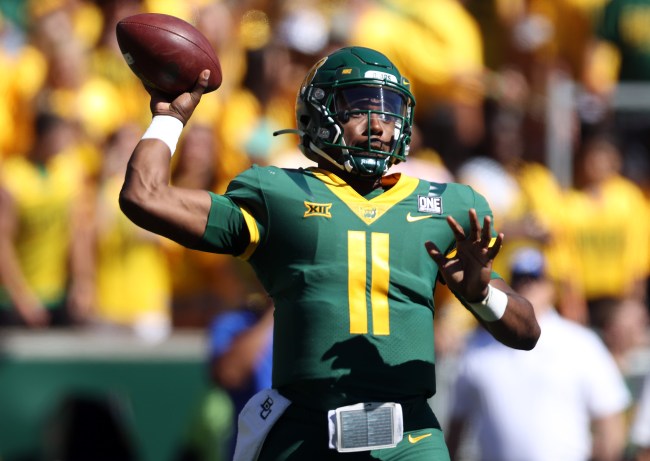 Late last month, Baylor head coach Dave Aranda announced that Blake Shapen will be the starting quarterback in 2022. It came as a bit of a surprise to many, considering that Gerry Bohanon started for the Bears last season, went 12-2, won a Sugar Bowl and accounted for 27 total touchdowns.

To Aranda’s credit, he did the right thing. He could have kept the quarterback competition open and dragged it out through the summer. That would have guaranteed depth at the position, because Bohanon is in his final year of eligibility.

By naming a starter now, Aranda allowed Bohanon to seek one final opportunity at another program. And that’s exactly what he did.

Not long after the quarterback decision was made at Baylor, Gerry Bohanon entered the transfer portal. He announced over the weekend that he will spend 2022 as a grad transfer at South Florida.

Earlier this spring, right before spring practice, Bohanon took down a 610-pound squat while his teammates proceeded to lose their minds around him.

By putting up that massive number as a quarterback, he surpassed when Jalen Hurts broke the internet by squatting 600 pounds. Bohanon not only called his former Big-12 counterpart but raised him by 10 pounds.

Bohanon was impressive in 2021 after waiting three years to finally become the starting quarterback at Baylor. He accounted for more than 2,500 total yards and won a program-high amount of football games.

Bohanon ultimately ended up in Tampa Bay because of what is being built by third-year head coach Jeff Scott.

As of right now, Bohanon is expected to be the starter. South Florida has been below .500 in each of the last three years and the transfer quarterback will be crucial to the Bulls’ success in 2022.