Giannis Antetokounmpo Is Staying In Milwaukee On A Five-Year Extension Worth $228 Million, The Largest Deal In NBA History 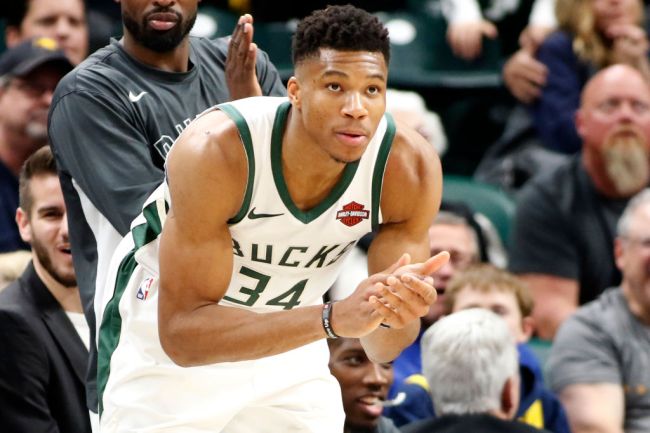 Giannis Antetokounmpo’s impending 2021 free agency was set to be one of this season’s biggest storylines, but he isn’t going anywhere and is getting PAID in the process. Milwaukee’s 26-year-old superstar agreed to a massive five-year supermax contract extension worth $228.2 million on Tuesday, according to Shams Charania. It is the largest deal in NBA history and breaks down to $45.6 million a year.

This is my home, this is my city.. I’m blessed to be able to be a part of the Milwaukee Bucks for the next 5 years. Let’s make these years count. The show goes on, let’s get it. 🤎🙏🏽 pic.twitter.com/895tCBE9RK

Had he not signed to stay with the Buck, the Greek Freak would have been the most coveted free agent since LeBron James in 2018, and one of the most important courtships of all time. Rumors (mostly from hopeful fans) connected him to joining James in Los Angeles, wanting to carve his own career in the spotlight of Madison Square Garden, teaming up with Luka Dončić and Kristaps Porzingis in Dallas, making a push for a championship in Miami with Jimmy Butler and meeting up with longtime friend Masai Ujiri in Toronto. It was going to be a free-for-all, but Milwaukee and Antetokounmpo seem to have wanted to get ahead of the chaos.

The Bucks added a key component this offseason by trading Eric Bledsoe and George Hill for Jrue Holiday, and the lineup is set to feature Antetokounmpo, Hiliday, Donte DiVincenzo, Brook Lopez and Khris Middleton for the foreseeable future. It is yet to be determined whether the assembled starting-five can reach NBA Championship heights, but keeping arguably the most important two-way player in the league in green is key.

As the son of Nigerian immigrants in Greece, Antetokounmpo grew up selling watches and sunglasses with his brother (and Bucks teammate) Thanasis on the streets in Athens. When his supermax extension is inked, his career earnings with the Bucks will be over $400 million. It’s a price worth paying for someone who has risen to Antetokounmpo’s caliber.

The 6-foot-11 forward was drafted No. 15 overall in the 2013 NBA Draft out of a small Greek basketball league as a raw 18-year-old talent who needed time to develop from both a physical and game standpoint. With help of the Milwaukee organization, Antetokounmpo has grown into his frame and become one of the league’s strongest and best point forwards. He earned Most Improved Player honors in 2017 and won back-to-back MVP awards in each of the last two seasons.

To put this contract into context, here are the top-five largest contracts in league history: