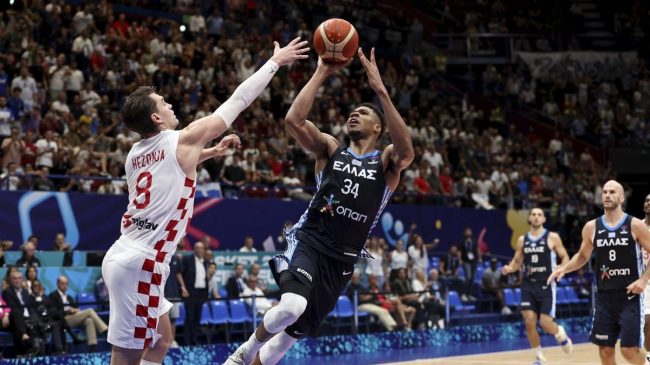 EuroBasket 2022 got underway Thursday and features some of the top players in the NBA playing for Europe’s best teams.

But on Friday, it was time for Milwaukee Bucks (for now) star Giannis Antetokounmpo to steal the show.

Giannis and sixth-ranked Greece squared off with No. 17 Croatia in the opening game for each in Group C.

Greece raced out to an early lead and took a commanding 46-30 advantage into the break. But Croatia began to chip away in the third quarter, closing the score to 70-62 headed to the fourth quarter.

The Croatian team, which boats NBA stars Bojan Bogdanovic, Dario Saric and Ivica Zubac as well as former No. 5 pick in the NBA Draft Mario Hezonja, pulled within 2 points at 84-82 with 1:32 left to play.

That’s when Giannis took over.

He first blocked a Zubac layup that would’ve tied the game. He then went to the other end and finished an alley-oop to push the Greece lead to 86-82.

With just over 10 seconds remaining, Croatia got a wide-open look at a 3-pointer to cut the lead to one. Or so they thought.

In just one second, Giannis flies from under the rim out to the perimeter to block Jaleen Devon Smith. He then corrals the ball and goes coast-to-coast one a layup and the foul to seal the game.

He finished the game with 27 points, 11 rebounds, six assists, three blocks and a steal. Most importantly, his team got the win.

They don’t call him The Greek Freak for nothing.