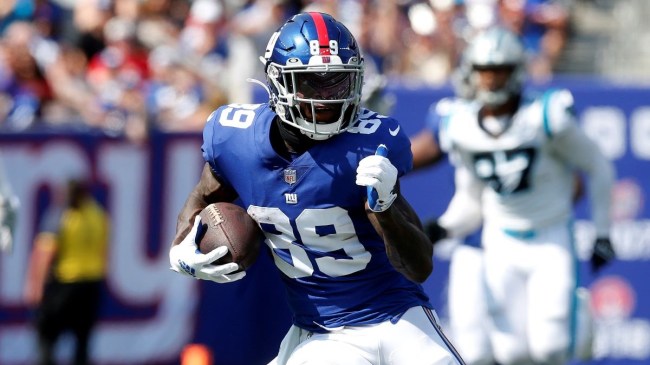 Wide receiver Kadarius Toney was electric at times for the New York Giants in 2021. The problem, however, was that those times were few and far between. The Giants selected the Florida Gators product with the 20th pick of the 2021 NFL Draft. He caught 39 balls for 420 yards as a rookie, but produced no touchdowns and played in only 10 games.

After a change in coaching staff, Toney has played even less in 2022. The speedy wideout appeared in just two of the Giants’ first seven games of the season. Toney has been vocal about both his lack of playing time and his critics, taking to social media to share his thoughts.

But now he won’t need to worry about either of those issues. At least, not in New York.

New York moved on from Toney on Thursday. The Giants traded the shifty wideout to the Kansas City Chiefs in exchange for a conditional third-round pick as well as a sixth-round pick in the 2023 NFL Draft.

Trade: Chiefs trade their conditional 3rd-round pick and 6th-round pick to the Giants for WR Kadarius Toney, per source.

The move comes at the perfect time for the Chiefs, who are currently on a bye week. The timing allows them to slowly introduce Toney into the fold.

Chiefs are on a bye this week so WR Kadarius Toney’s Kansas City debut would be Nov. 6 at home vs. the Titans.

The Giants, meanwhile, remains one of the surprises of the NFL season after their impressive 6-1 start. But the trade left many fans feeling like the organization completely wasted its 2021 first-round pick.

Wow. The Giants have traded WR Kadarius Toney to the Kansas City Chiefs, a source confirmed. They get a conditional 3rd round pick and a 6th round pick in return.

Quite a waste of a first-round pick from one year ago.

Talk about a waste of a first round pick… smfh

Though others felt like it was the right time for the team just move forward.

The genius of Dave Gettleman’s legacy as GM of the @Giants lives on !! Cut bait w/ Toney and play the guys who want to play for Daboll !!#Toney #Chiefs #GMEN #NFL #BigBlue https://t.co/LR9r9lcVKF

Then they're stuck with a miserable malcontent. He'll only get worse. These situations with diva receivers don't ever improve. Giants just cut bait with Toney. Smart move.

Toney will hope to turn things around with Kansas City. The Chiefs have struggled to replace star wide receiver Tyreek Hill after trading him to the Miami Dolphins. They may well see Toney as the idea fit to try to jump-start their vertical passing game going forward.