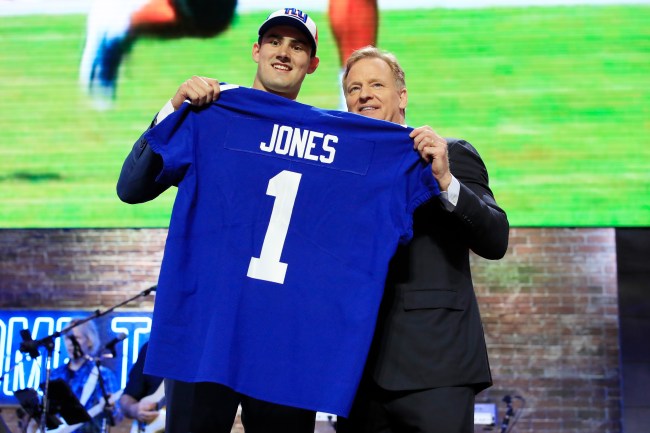 Seeing the life drain out of Giants fans’ eyes as it was announced that they’d chose Duke QB Daniel Jones with the 6th overall pick in the NFL Draft is why sports was invented. Giants general manager Dave Gettleman said Jones is “the right kid for us,” an opinion fueled by Gettleman watching Jones play for three series at the Senior Bowl. Don’t scoff at the Senior Bowl–the G-Men have drafted back-to-back-to-back Senior Bowl MVPs in Davis Webb, Kyle Lauletta, and Daniel Jones.

Giants fans aren’t happy, especially seeing as Josh Allen, a Kentucky linebacker and certified freak of nature, was still on the board (the Jags selected Allen the very next pick).

The fury is real.

How low is Giants fan morale after last night? The guy that won season tickets for 100 years already put them on StubHub.

I found wayyyy too much satisfaction in watching Giants fans melt down after the pick.

With the 6th pick the Giants select …let my entertainment begin. Hahahahahahhahahahah thank you Gettleman. I didn’t think you could be hated anymore. #giants pic.twitter.com/iFtk66snyb

And with the 6th overall pick in the 2019 NFL Draft, the Giants select… DANIEL JONES. pic.twitter.com/pSpdnliutV

Joe Budden was SHOOK after the Giants draft pick 🤣 (via @Cyn_Santana) pic.twitter.com/NpaaaK2onA

Giants fans: “We’re sick of Eli! Get him out of here, we’ll take anybody!”

Giants fans after the draft pic.twitter.com/jmVz4Zzeqj

Dwayne Haskins reaction video after getting passed up at No. 6 by Giants. Fall to No. 15 will cost him at least $10 million pic.twitter.com/LRGUFj0wr3

Hey, the silver lining is that JJ Watt was booed on Draft night. There’s hope. Not that much, but hope.