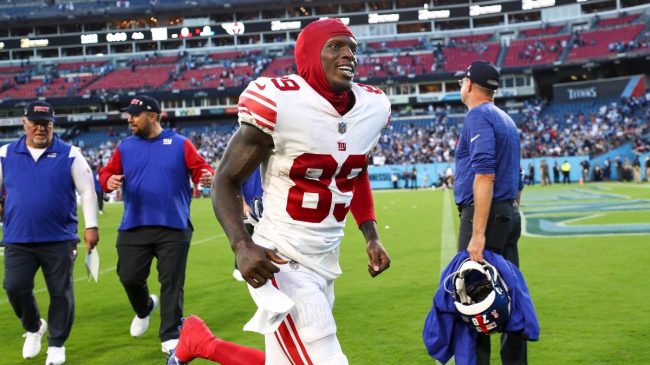 The New York Giants squeaked out a win against the Tennessee Titans, giving the fanbase life from years of misery. However, Kadarius Toney didn’t play much of a role in Week 1. He logged minimal playing time and was asked about it Wednesday.

The Giants’ wide receiver doesn’t seem to mind not playing at all, per SNY Giants. Especially considering New York won the game. Toney only played in 12 percent of the offensive snaps, putting up two rushing attempts for 23 yards. He looked phenomenal in both of his touches, as he is a true YAC monster.

"If I played two plays, one play and we win – I don’t really care nothing about getting no…it’s okay. You want a dollar?"

However, it does question whether or not Toney would be humming the same tune had his team lost to the Titans. Considering he’s a former first-round selection, you’d think New York would be getting him on the field as much as possible. Even so, the Giants wide receiver has had a rocky start to his career.

For that reason, it looks like Kadarius Toney must earn his reps. He’s looked great in flashes but he has yet to be consistent. We’ll see if he can start putting the pieces together as the season goes on. Especially since it wouldn’t hurt for the Giants to have another viable threat outside of Saquon Barkley.

Keep an eye on Toney, as there is a real chance he sees the field more often as the season progresses. The Giants could use all the help they can get if they want to remain competitive in the NFC East.