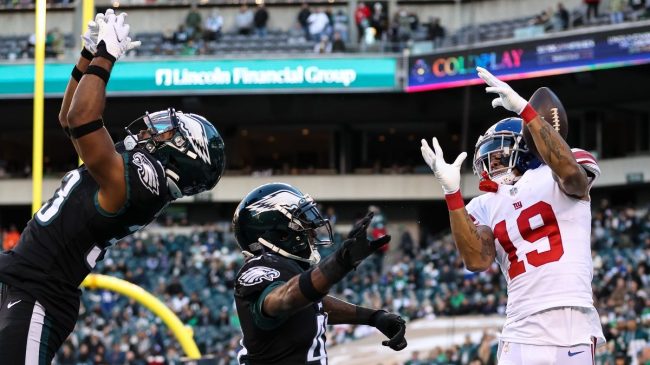 The New York Giants have been surprisingly good to start the 2022 season. However, all eyes are on Kenny Golladay right now, as he’s not living up to his monster $72 million contract. Now, an embarrassing revelation involving Zach Wilson proves just how bad the Giants messed up.

According to Pickswise, Kenny Golladay has yet to record a single touchdown since joining the Giants last season. Meanwhile, New York Jets quarterback Zach Wilson caught a touchdown pass in Week 4 this year. This is not a great look for the G-Men, especially considering they gave Golladay a monster contract to play wide receiver.

Receiving TDs since they joined NY in 2021

Typically quarterbacks throw touchdown passes. However, the Jets pulled off a Philly Special against the Pittsburgh Steelers. Zach Wilson found himself wide open in the end zone for an easy touchdown. Meanwhile, Kenny Golladay has been noticeably absent since signing with the Giants.

Injuries have prevented Golladay from playing as much as he’d like. Regardless, whenever he’s on the field, he has been a complete non-factor for New York. This year alone, the former star receiver has only recorded a measly 2 receptions for 22 yards off of six targets.

Maybe Kenny Golladay can get the ball rolling once he returns from injury but it’s hard to imagine he does so. Since joining New York he’s been a hot mess that is unreliable in the passing game. Now he’s being outplayed by Zach Wilson who doesn’t even play the same position. Yikes.