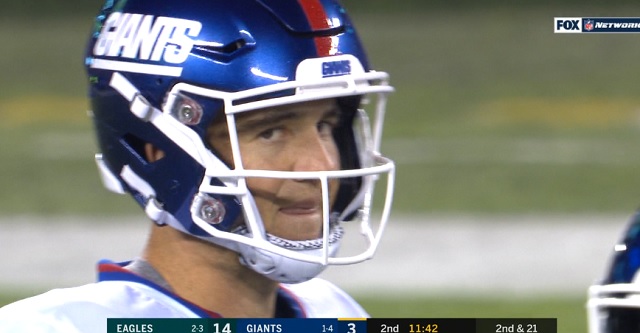 Behind closed doors, several Giants players have expressed frustration with Manning’s performance, according to sources. One player specifically commented recently about Manning’s inability to do anything against Cover 2 and zone defenses.

Manning threw and interception early in tonight’s game vs the Eagles and it seems like Giants fans are fed up with him as well.

Eli Manning: Washed since at least 2015

How is eli Manning a starting quarterback? Can’t throw can’t run can’t make decisions, falls down if a lineman is anywhere near him, and if he gets hit the ball is coming out. Washed

Things have gotten so bad for Eli that he got booed off the field after he threw another check down pass on third down.

Feel bad for Eli. He brought them 2 superbowls. He beat the greatest team ever in the ‘07 Pats. And he’s gonna get booed off the field to end his career