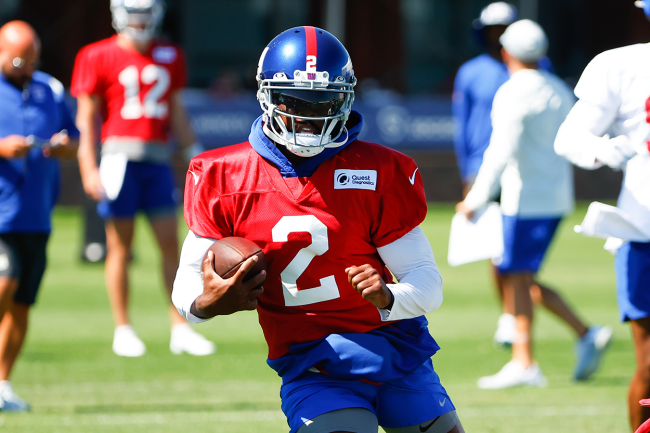 There has been a lot of conversation about the starting quarterback job for the Giants over the last few days. New York and first-year head coach Brian Daboll have said that even though Daniel Jones is the team’s QB1, Tyrod Taylor will be getting some first team reps.

It seems as though the team plans to work Taylor into the first team over the next few weeks so that he is ready in case Jones goes down or simply cannot find any success. That has allowed Taylor to get very close with the first team offense, and he is turning heads amongst his teammates.

However, it is not because he has been playing well, although he has reportedly done that also.

The reason that Taylor is getting the attention of his teammates is because of how he smells. Apparently, he smells great.

When asked about what he has seen from Taylor over the course of training camp, Saquon Barkley immediately went on a tangent about the veteran quarterback’s scent. He said that no matter what time of the day it may be — whether before practice or after a brutal workout — Taylor smells good.

Barkley also spoke about Taylor as a leader, as a player and as a mentor, but he spent the majority of the time discussing his smell. He said that his backfield mate will not give him the secret.

"This might sound so weird, but he smells good" 😂 pic.twitter.com/0kRVdRfEdd

Obviously, somebody needs to get to the bottom of this. Someone needs to step up and ask Taylor the hard question— HOW DO YOU SMELL SO GOOD?!

Look out, Daniel Jones, your better-smelling backup is officially waiting for his chance.