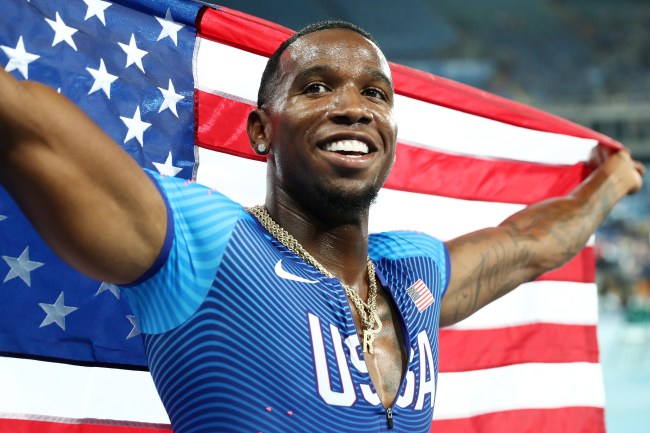 You guys may remember Gil Roberts from being one of the four legs in the United States gold medal 4×400 relay team at the 2016 Rio Olympics.

You also may have heard that back in March, the 28-year-old Texas Tech grad tested positive for a drug called probenecid, a medicine primarily used to prevent gout and gouty arthritis. But, the medicine can also be used to mask banned substances in one’s urine. In May, the United States Anti-Doping Agency claimed Roberts’ B sample also tested positive for the masking agent, thus dishing him a suspension.

In July 2017, in a strange turn of events, The ADA’s decision was reversed by an outside arbitrator, upholding Roberts’ defense that the banned substance got into his system from–yep, you guessed it–passionately kissing his girlfriend.

And today, the Court of Arbitration for Sport ruled against the Anti-Doping Agency’s appeal, claiming Roberts’ upheld his burden of proof, ESPN reports. Per the CAS arbitrators:

[It is more likely than not] “that the presence of probenecid in the athlete’s system resulted from kissing his girlfriend.”

“There could have been tongue kissing, but it was more that she kissed me so soon after taking the medicine,” Roberts told The New York Times on Thursday.

So, how did this Houdini dodge suspension by using the Hail Mary alibi that he was only guilty of playing tonsil hockey with his girlfriend? ESPN explains:

As part of the evidence, the stepfather of Roberts’ girlfriend said she was in India a few weeks before the March test and came down with a sinus infection. A local “chemist” there directed her to take one capsule of Moxylong per day for a period of two weeks.

The woman, Alex Salazar, continued to take the medicine when she returned to the U.S., breaking the capsule apart and pouring its contents into her mouth before swallowing with water. USADA said the sides told the arbitrator that Roberts and Salazar “kissed frequently and passionately” when they were together, including on March 24, when Roberts was initially tested. Salazar ingested the medicine that afternoon, the two kissed after that, and the doping officer arrived three hours later.

Although seemingly an extraordinary case, Roberts isn’t the only one who’s used the kissing excuse. Tennis player Richard Gasquet swerved a ban in 2009 after claiming the traces of cocaine found in his system were due to kissing a girl at a nightclub. Canadian pole-vaulter Shawn Barber was able to compete in the Rio Olympics in 2016 after testing positive for cocaine, citing relations he had with a women he met on Craigslist.