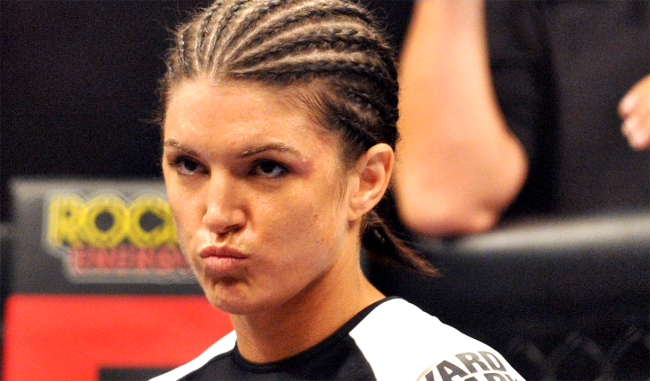 Ronda Rousey caused a bit of a buzz in the world of mixed martial arts earlier this month when she revealed that there was one person she would come out of retirement to fight, the former “face of women’s MMA” Gina Carano.

“Gina Carano, she’s the reason why I got into fighting, she’s the reason why I knew it was a possibility. I will always be forever grateful,” said Rousey, adding, “I will fight Gina wherever she wants and if she doesn’t want to, forever, leave that offer there. It’s a respect thing, not like a, ‘F— you. I’m coming to get you.’ It’s just like, ‘Hey, if you ever wanna pull that card out, it’s there. I love her. Thank you, Gina, for everything you’ve done.”

On Tuesday, Carano admitted during an appearance on Fox News that despite her decade-plus layoff from the MMA game, she wouldn’t rule it out.

Something many MMA fans may not be aware of is the fact that back in 2014 a UFC title fight between Ronda Rousey and Gina Carano was on the table and Carano was more than willing to accept it. That is, until UFC President Dana White absolutely botched the negotiations – something for which he later apologized.

Carano explained just how close she was to fighting Rousey back then on Tuesday’s edition of The Joe Rogan Experience.

“When you were thinking about coming back, I remember there was that conversation with you where there was there was a potential comeback fight with Ronda,” Rogan said to Carano. “How serious was that?”

“It was very serious,” Carano replied.

“What stopped it from happening?” Rogan then asked.

Carano says Dana White and UFC owner Lorenzo Fertitta invited her out and told her, “Hey, we’d like to offer you a million dollar fight with Ronda. And I was like, damn, what took you guys so long?”

At that time, however, Carano had been out of MMA for several years and didn’t have a team or a gym where she could conduct her camp for the fight.

Knowing that it would take her several months to get everything lined up, get her weight stabilized for the fight and to actually train for Rousey, she asked White to keep things quiet until she could get everything sorted out.

“Reasonable,” Rogan interjected. “It’s not even reasonable, you really need like a year, right?”

Carano says she felt at that point in time she could have been ready in six months.

White then, completely ignoring Gina’s request to keep things on the down low, went public, telling people that he had her on the hook to fight Rousey.

“First of all, I don’t even know who I’m going to train with,” Carano continued. “So now you’ve made it harder for me to walk into a gym and just get comfortable with people because now everybody knows I’m looking for a team.”

After asking Dana White to chill with all the Rousey fight talk in public, she says White “said something pretty aggressive over text messages.”

“And I was like, okay, I’m not going to do that. It was very simple for me. That was going to be something for me and I was excited to be back in that world and I was excited to do something like that. I respect Ronda and I thought it was exciting, but after … you just can’t go back in that world and feel instantly disrespected on so many levels. So I was like, I’m cool, I’m gonna go.”

The subject then turned to present day and Rogan asked her how old she is, which is 40.

“Do you think you would still do it?” he then asked Carano.

“I mean, I still can’t even say that I wouldn’t,” she replied.

“Because, you know, Ronda said, you’re the one,” Rogan interjected.

“I know, and honestly I feel like she’s the one as well if I wanted to, you know?” she responded.

Check out Gina Carano’s entire interview with Joe Rogan below…