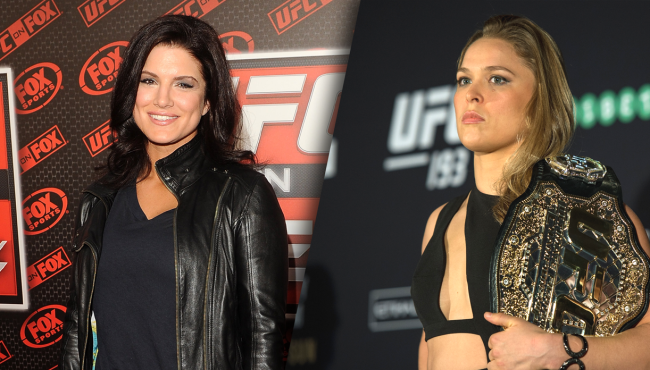 Earlier this month, 35-year-old Ronda Rousey admitted that there is one fight that would get her to return to mixed martial arts: Gina Carano.

Ronda Rousey and Gina Carano’s MMA careers, sadly, for fans, did not overlap, so the fight never happened.

“If she wanted to come into my backyard and do the Rocky thing, you know, ‘ding-ding’ and we just do it in the backyard, I don’t care,” Rousey added. “I will fight Gina wherever she wants and if she doesn’t want to, forever, leave that offer there. It’s a respect thing, not like a, ‘F— you. I’m coming to get you.’ It’s just like, ‘Hey, if you ever wanna pull that card out, it’s there. I love her. Thank you, Gina, for everything you’ve done.”

This week, Carano was asked about Ronda Rousey’s standing offer and surprisingly, the 40-year-old fighter turned actor said she wouldn’t rule it out.

“You know what? Just never put it past me,” Carano said. “It could happen. It would be six months from now because I have a lot of stuff I need to do.”

"It could happen"@ginacarano says she's open to fighting @RondaRousey in the MMA and wants to work with her to make movies @dbongino pic.twitter.com/mEmjyxwNN6

Gina Carano vs. Ronda Rousey back in the day would have broken pay-per-view records

Gina Carano and Cris Cyborg were the first women to headline a major MMA event: Strikeforce: Carano vs. Cyborg. Strikeforce even created their first Women’s Championship just for that matchup.

Rousey later became the final Strikeforce Women’s Bantamweight Champion and ended up holding the record for most UFC title defenses by a female before losing her final two fights to Holly Holm and Amanda Nunes in 2015 and 2016 respectively.

In September of 2014, Gina Carano was in negotiations to fight against then UFC champion Rousey in December, but it ended up not happening. No specific reason was given, but Carano later revealed that she was “stoked” to get the right, but balked after UFC President Dana White deceived her.

“…the next day, Dana was out there talking about me and talking about my name and telling people that he was going to sign me and I don’t even have a team yet,” she recalled. “And I was like, that is not what we discussed. You were supposed to give me at least six months to find a team. Then he started to put on the pressure in the media. It was a bummer because I told him over a text message that it was not what we had talked about.”

Carano also admitted that she had hoped to become the first woman fighter signed by the UFC, but it was “a dream that didn’t get to happen. But, I was able to open up doors for women to be able to walk into gyms and it could be easier. And I will always cherish that.”

MMA fans, many of whom wanted this fight to happen ten or so years ago, were fired up that Carano didn’t shoot down the idea.

And it will sell more PPVs than any current fight (male or female) that the UFC can make right now.
It was very obvious that Gina was back in Dana’s good books when she turned up at a recent PPV.

Reality is for all the hating out there y’all know u would still watch this fight! 😂 @danawhite make it happen 135 or 145. @ginacarano @RondaRousey

Ronda Rousey vs Gina Carano at WrestleMania Hollywood next year would be better than MMA fight.