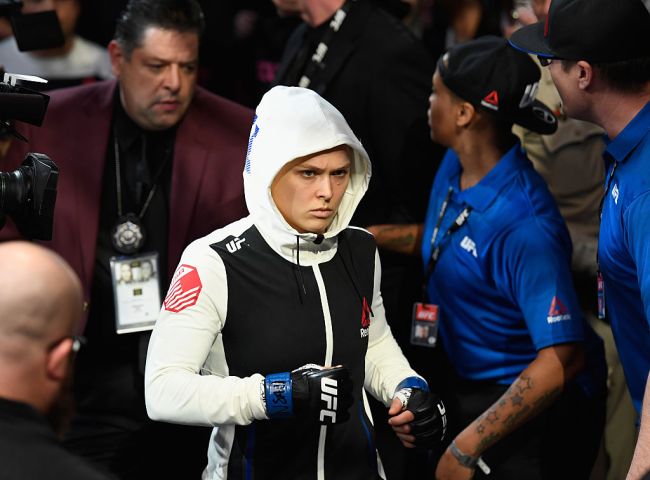 The last time UFC fans saw Ronda Rousey step into the Octagon, she was quickly finished by Amanda Nunes nearly 6 years ago. Since then, Rousey has appeared in movies and begun a career in professional wrestling.

While she doesn’t seem to have any plans of bringing an end to her career in the WWE, she revealed in an interview with Kurt Angle that there is still one fight that would interest her in a UFC return.

THE BADDEST WOMAN ON THE PLANET

Topics include UFC, joining WWE, and Wrestlemania 34!#TAP: RONDA ROUSEY is available NOW on all platforms! Get ad-free access on https://t.co/vcYW7EnwnH pic.twitter.com/6ygYY0YwPR

The one woman Rousey would be interested in returning to fight is Gina Carano.

“There’s only one person. There’s only one person I would come back for. I mean, I’ve said it a million times, for Gina, man. Gina Carano, she’s the reason why I got into fighting, she’s the reason why I knew it was a possibility. I will always be forever grateful. If she ever was like, ‘Ronda, I wanna fight you tomorrow at 205 pounds,’ like whatever the hell she’d want, I’m not saying she’s 205 pounds.

If she wanted to come into my backyard and do the Rocky thing, you know, ‘ding-ding’ and we just do it in the backyard, I don’t care. I will fight Gina wherever she wants and if she doesn’t want to, forever, [I will leave that offer there]. It’s a respect thing, not like a, ‘Fuck you. I’m coming to get you.’ It’s just like, ‘Hey, if you ever wanna pull that card out, it’s there. I love her. Thank you, Gina, for everything you’ve done.”

Like Rousey, Carano was a pioneer in women’s MMA. Her fight with Cris Cyborg was the first women’s fight to headline a major MMA event and brought a new level of popularity to women’s MMA.

Carano hasn’t fought in the nearly 13 years since losing that fight, but used that popularity to begin a very successful acting career that saw her secure prominent roles in “Deadpool” and “The Mandalorian”.

While neither Rousey nor Carano would be likely to be able to compete at a particularly high level after their long layoffs, this is still a matchup that would generate plenty of interest thanks to the impact each woman had in MMA and the mainstream popularity they’ve garnered since leaving the sport.