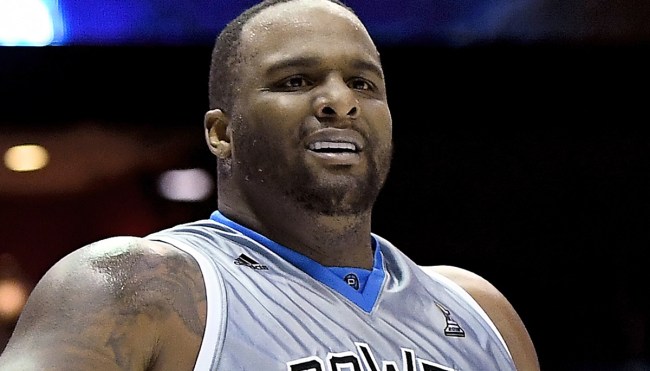 Earlier this year, ESPN picked the perfect time to cut to a shot of Glen Davis during a showdown between the Celtics and the Nets in Boston, as cameras captured the Very Relatable Moment where Big Baby feigned shock and surprise after having his spot blown up by the rightful owner of the seat he was occupying.

A couple of weeks later, that seemingly innocuous clip took on an entirely new meaning when Big Baby called off a scheduled appearance on a Boston radio show because it interfered with the court hearing he’d been ordered to attend after having his presence at the game broadcast to a national audience.

Why? Well, Davis was one of the 18 former players who was arrested and charged with defrauding an NBA healthcare plan out of millions of dollars as the result of an investigation that led to his arrest in the fall of 2021. The retired big man was able to post $200,000 bail, but under the terms of his agreement, he must remain in either New York or California unless given permission to travel elsewhere.

As you likely know, Boston is not located in either of those states. However, that apparently wasn’t enough to prevent Davis from heading back to Beantown to watch his former team faceoff against the Heat in Game 4 of their Eastern Conference Finals showdown on Monday.

According to Law360, that decision did not sit well with the magistrate presiding over the bail hearing he appeared at the following day. It would appear the increasingly hot water Davis found himself in on Tuesday is reaching a boiling point, as U.S. District Court Judge Valerie Caproni has threatened to revoke his bail and throw him in jail if he’s found guilty of another violation

The outlet also says the judge couldn’t stop herself from deploying some basketball terminology while issuing the warning, as she reportedly used the term “fouled out” while stressing Davis won’t receive any more second chances.

Of course, if that was actually the case, he’d already be in jail. However, something tells me Davis didn’t need to exercise a ton of restraint when it came to resisting the urge to let her know a baseball reference would be more appropriate to describe the “three strikes and you’re out” policy it seems she’s applying to his case.