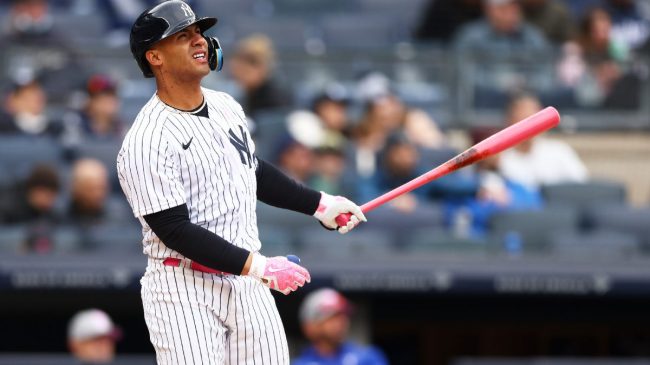 Gleyber Torres had himself a day at the park on Sunday.

The Yankees second baseman racked up a pair of hits to lead his team to a 2-1 victory in the first game of a doubleheader against the Rangers. Torres was the only New Yorker to tally a multi-hit day, and he knocked in one of the team’s two runs scored on the afternoon.

That RBI came on the game’s final play as he bashed a home run into the stands in right field. The walk-off bomb gave the Yankees a 2-1 win, and it made Torres the hero in a tightly contested ball game.

While the homer was obviously the headline of the win, it was what Torres did while rounding the bases that had folks talking after the matchup.

Gleyber Torres hits the griddy after his walk-off home run

Torres took his time rounding the bags after his game-winning home run.

After making initial contact, he knows the ball has a chance to leave the park. Torres slowly walks out of the box as he watches the high fly ball make its way to the right field seats.

Once it disappears into the bleachers, the infielder begins into his trot.

After rounding third base, he breaks into the griddy. We’ve seen the move many times in sports over the last year, whether it be in soccer, basketball, or hockey.

The move has become a popular one that’s now made its way onto the diamond.

For Torres, the showing gave him his fourth home run of the year while improving his batting average to .237. We’ll see if he has a follow-up performance in him during Game 2 of the doubleheader.