Did You Catch The Funny Glitch During Mayweather-McGregor Which Showed A Fox Host In A Robe? 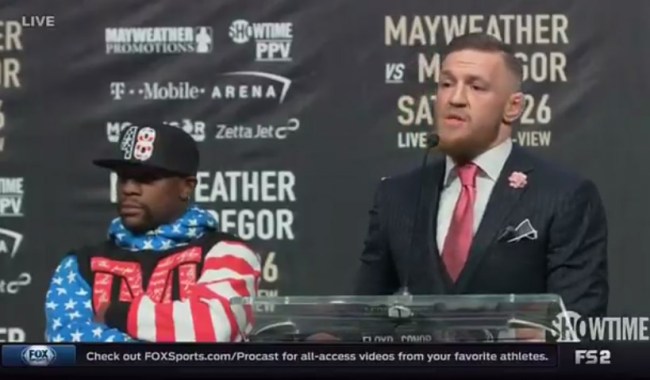 The first stop on Floyd Mayweather and Conor McGregor’s World Press Conference Tour was 100% the spectacle that we all had hoped and anticipated it would be. Neither of the fighters were at a loss for words and while it wasn’t the car crash we hoped for it came pretty darn close at times.

McGregor wore a crazy custom-made pinstripe suit, only the pinstripes turned out to spell the words “fuck you” all over it. Then McGregor caught some major heat for telling Mayweather to “dance for me, boy.” And even when it was over Floyd Mayweather, Sr. crashed McGregor personal presser, yelling at Conor he would “beat the shit out of him.”

So yeah, all in all, it was about what we expected. 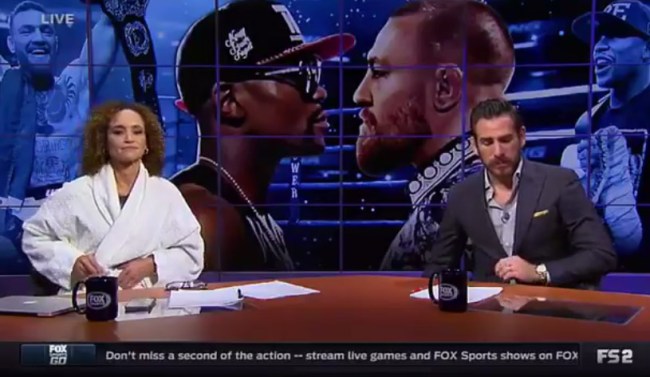 Bryant looked so comfy there. Makes me want to go out and get myself a DudeRobe. And then this happened…

Whoops! Bryant’s got some quick reflexes though, I’ll give her that.

So… who else can’t wait for day two of this carnival sideshow to take place in Toronto later today?!