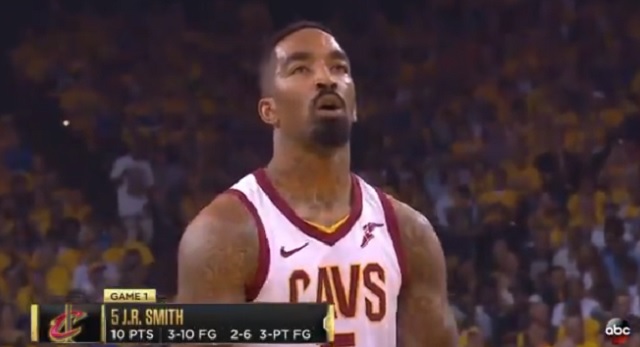 It’s been two days since JR Smith became a meme after his game 1 blunder when he grabbed a late game rebound and had a brain fart that he will probably never live down.

Smith hasn’t been able to give a straight answer as to what he was thinking on the court during the late-game mishap.

After thinking about it a lot after the last 24 hours and however long it’s been since the game was over, I can’t say I was sure of anything at that point,” Smith said.

mith was asked if he remembered telling an irate LeBron James, “I thought we were ahead,” after the clock expired, as it appeared he said in a camera angle captured by the ABC broadcast of the game.

During tonight’s game 2 of the NBA finals, Golden State Warriors fans at Oracle arena had a bit of fun with JR when they chanted “MVP” while he was at the free throw line in the first quarter of the game.

JR Smith will probably get mocked by opposing fans for his NBA finals blooper for the rest of his playing days.