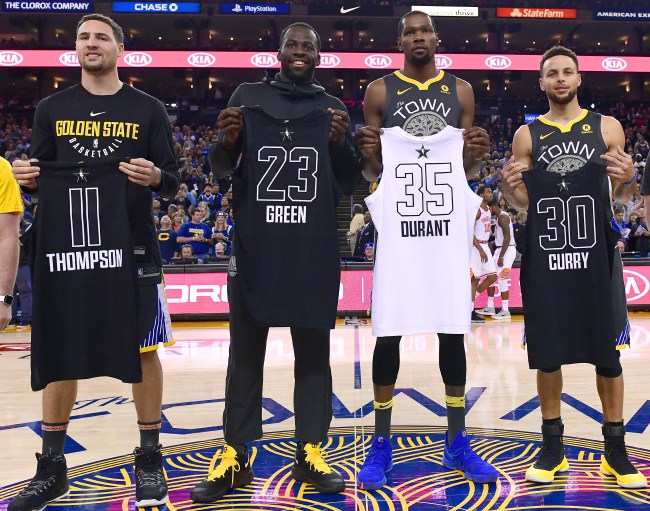 The Golden State Warriors are looking for their third-straight NBA title and fourth in five years, and, given their success, it’s only natural for everyone on the team to “eat.” That means that guys like Draymond Green and Klay Thompson, among others, are in line for huge salaries in the next year-plus, as they’ve moved from good players to All-Stars to franchise changers. That’s the downside of team success sometimes.

While there probably isn’t a Golden State Warriors fan who would trade the past five years for anything, the organization has some difficult decisions to make to try and sustain that championship level. After all, not everyone can be paid $30 million or more like Stephen Curry and Kevin Durant — unless the Dubs want to spend like crazy to keep their four All-Stars together.

According to ESPN’s Front Office Insider Bobby Marks, the possibility of the Warriors keeping Durant, Curry, Thompson and Green will be costly AF. Just how much? Marks broke down the numbers, projecting the bill owner Joe Lacob would have to pay for just those four All-Stars in the next four seasons — which includes salary of the four players + the insane luxury tax bill.

The grand total? A whopping $1.6 billion! The cost of winning sure is expensive, isn’t it?

To put that into perspective, Joe Lacob and his ownership group paid “just” $450 million in 2010 to buy the Golden State Warriors, so they’d be spending about 3.5 times that for four players. Granted, the players aren’t exactly chumps, having proven to be some of the best in the game, but, damn, that’s a ton of money.

A recent report said the Warriors were hoping to sign Kevin Durant to a long-term deal prior to his Achilles injury — which will keep him out for all of next season — and Warriors head coach, Steve Kerr, briefly talked about the team’s chances of re-signing Klay Thompson this summer. While all that sounds great now, would Lacob and his fellow owners really want to shell out $1.6 billion for four players and a few minimum salary guys? Doubtful. But you know what they say, “if it ain’t broke, don’t fix it,” so maybe the owner thinks the long-term reward is worth it.