Hard-Hitting Journalism: Brave Wall Street Journal Claims The Warriors Wouldn’t Be A Dynasty Without Their Starting 5 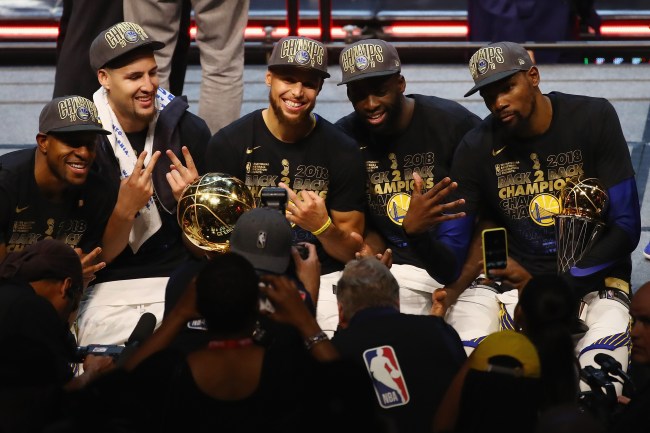 The Warriors would not be a dynasty without Stephen Curry, Klay Thompson, Draymond Green, Andre Iguodala and Kevin Durant https://t.co/9Po7NDjWWX

The WSJ knew damn well that claiming the Golden State Warriors would not be a dynasty without a roster of human players would receive harsh blowback from the growing contingency who believe that a team is capable of achieving long-standing success simply by putting blue and yellow jerseys on lamp shades. They expected droves of these people to picket outside their New York office.

Still, in the face of imminent danger, these hard-hitting journalists said what no one else was brave enough to:

So how did the Golden State Warriors do it?

It’s because of the five players who have been essential to this magical run. The Warriors would not be a dynasty without Stephen Curry, Klay Thompson, Draymond Green, Andre Iguodala and Kevin Durant. Every one of them was necessary to sustain a level of success that’s unprecedented in the modern NBA.

I feel so naive, so foolish for thinking that a starting five made up of Quinn Cook, Shaun Livingston, Damion Lee, Jonas Jerebko, and Andrew Bogut would still allow the Warriors to win 75 percent of the 99 playoff games they’ve appeared in in the last five years.

Shut it down, ESPN. You don’t have the testicular fortitude to make such assumptions.