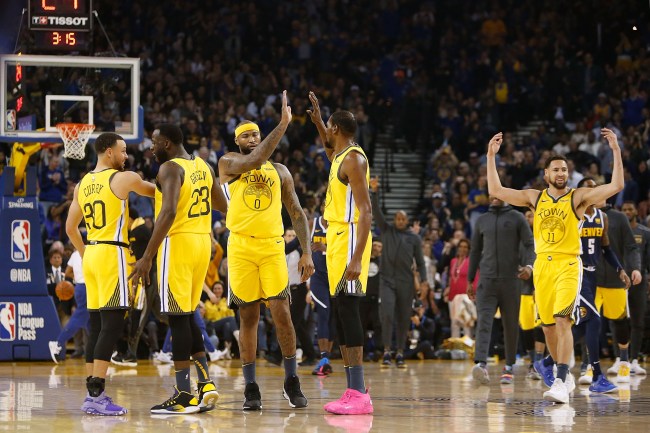 The Golden State Warriors are locked in a tight second-round NBA Playoffs series with the Houston Rockets at the moment, but their quest for a third-straight NBA title has always had a certain cloud cast over it. That’s because two of the team’s biggest superstars, Kevin Durant and Klay Thompson, are set to become free agents this summer, with Durant long-been linked to the New York Knicks and Thompson expected to get a max contract from another team, leaving the Warriors in a difficult position to sign both of them.

Given the uncertainty of both Durant and Thompson, the Golden State Warriors are preparing for the absolute worst. That’s according to ESPN’s Adrian Wojnarowski, who said on Get Up! this morning that the franchise is looking at a possible “seismic change” should the two All-Stars leave this summer. Here’s what Woj had to say on the TV show.

“Internally in Golden State, there’s a sense of let’s try to put aside what’s coming in July. We have a chance to do something very rare in sports, to three-peat. Let’s try to keep our focus there and win the title, then let July play out the way it’s going to. But I think the Warriors are bracing for possibly seismic change within that organization.”

When it comes to Kevin Durant, Woj added that he doesn’t think there’s much conversation between the two sides. That’s because the reporter said he believes KD already knows what he wants, it just comes down to what he prioritizes this time around during free-agency — which was focused on championships in 2016 when he signed with the Warriors.

“I don’t know if there’s a lot of talking that has to happen between the Warriors and Kevin Durant,” Wojnarowski said. “I think he knows what it is, what he wants, and there may be nothing the Warriors can do or say to change that.”

In terms of Klay Thompson, Woj believes that, should the Golden State Warriors offer him the max deal — which is expected to be $190 million over five years — the shooting guard will remain with the team. If the Dubs fail to do so, though, Wojnarowski thinks the Lakers or Clippers could be major players, with both teams believed to be linked to a lot of the top free agents this offseason.

“If they come with a five-year, $190 million max deal for Klay Thompson, that’s done on July 1—he’s going into the new building with Steph Curry,” Wojnarowski said. “If they try to do anything less than that, you can expect Klay Thompson to be out in free agency. Watch not for the Lakers, then, but the Clippers.”

Sure, the Golden State Warriors might be looking for their fourth NBA title in the past five years, but with the uncertainty of two of the biggest stars — along with the possibility of losing DeMarcus Cousins in free agency, as well as the decision about a Draymond Green extension — the team could look mighty different heading into next season. It kind of feels like this is the final rodeo for this team given some of the drama going on internally, but, who knows, if each player prioritizes winning first over everything else, Golden State could keep the dynasty going for years to come.