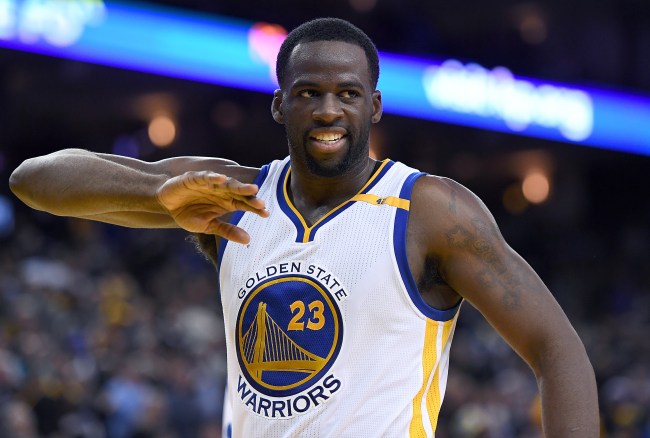 Draymond Green is one of the top and most physical defenders in the NBA, acting as the nucleus for the Golden State Warriors as they try to shutdown opponents. That defense has been what’s led Green, a former second-round pick, to three NBA titles, three All-Star appearances and one Defensive Player of the Year Award (DPOY Award) in his first six-plus seasons.

Defense has been Draymond Green’s calling card since he entered the league, as he prides himself on keeping the other team’s best scorer in check rather than focusing on pouring in points for the Dubs; leaving that to his other teammates who are more offensively capable. And, for Green, while he’s the ultimate team player who cares only about winning titles, he has a really good reason why he’s looking for this year’s NBA Defensive Player of the Year Award — actually, he’s got 235 million reasons.

That’s because Green, should he win the individual award, would become eligible next offseason for the five-year supermax extension that’s worth $235 million. No, bros, that’s not a typo, Green could ink a deal that would pay him an absurd $47 million a season beginning in 2020 — which seems outrageous for a guy not named LeBron James, Stephen Curry or Kevin Durant.

While the money itself is crazy to think about — Draymond Green would earn more than $573,100 per game when calculating an 82-game NBA season — the fact that his future financial fate is in the hands of subjective voters is even crazier. Is Green almost a lock each year to get votes for Defensive Player of the Year? Obviously. But will it be enough to get him his second one and the potential to earn those dolla, dolla bills, y’all? We’ll have to see.

Never one to shy away from speaking his mind, Draymond Green talked about the topic earlier this season, saying he “needs that,” when referencing the DPOY Award. Here’s what he had to say about it, per ESPN.

“I need that,” Green said Wednesday night after the Golden State Warriors’ 131-121 win over the New Orleans Pelicans. “I need that bad. Real bad. I made second team all-defense last year. I’m pissed about that still. I’ll be pissed until I right that, so that’s a serious goal of mine this year. And I’m on it every night.”

Green said he wakes up each morning with the award on his mind.

With the potential of $235 million, I’d hope Draymond Green has the DPOY Award in his mind every morning, because that’s a hell of a lot of money.

Of course, even should Green win the award and become eligible for the supermax extension in 2020, it doesn’t necessarily mean that he’ll get it. After all, the Golden State Warriors have other high-priced guys who command superstar salaries, and Green doesn’t necessarily have the all-around game that players like the aforementioned Durant or a Klay Thompson have. However, with both Durant and Thompson eligible for free agency this offseason, should he walk, Draymond Green could be the big winner, scooping up some of that leftover money.

A recent article from Bleacher Report outlined three major candidates for this year’s Defensive Player of the Year Award — Green, Rudy Gobert and Paul George — with the site offering up cases for each as to why he should win. Here’s what B/R had to say about Draymond Green.

Green’s combination of speed, strength, length and smarts makes him one of the best defensive players in NBA history. He does everything from defending the rim from the help side and squashing post-ups like Gobert to switching onto guards on pick-and-rolls and defending the best ball-handler like George. He quarterbacks the defense and has changed the way teams defend in the modern era.

Although the 6’7″ Green is often defending power forwards on the perimeter, he’s able to make heroic blocks at the rim because of his uncanny awareness and timing.

And Green’s head coach on the Warriors, Steve Kerr, offered up his own support as to what makes the small forward such a lockdown defender in the league, per the B/R article.

“For the modern NBA, the way the league is played, it’s so hard to find anybody like Draymond who can literally cover all five positions and read and react and play free safety and analyze everything that’s going on and make those split-second decisions and be in the right place at the right time,” Kerr said. “He’s amazing.”

Time will tell the fate of Draymond Green and his eligibility for that $235 million supermax extension, but, should he win the DPOY Award, look for him to do whatever he can to try and get that money. Don’t think that Green reportedly close to hiring Rich Paul as his agent is just a coincidence, given the stakes of such a contract, because Paul has a history of getting as much money as possible for his clients.