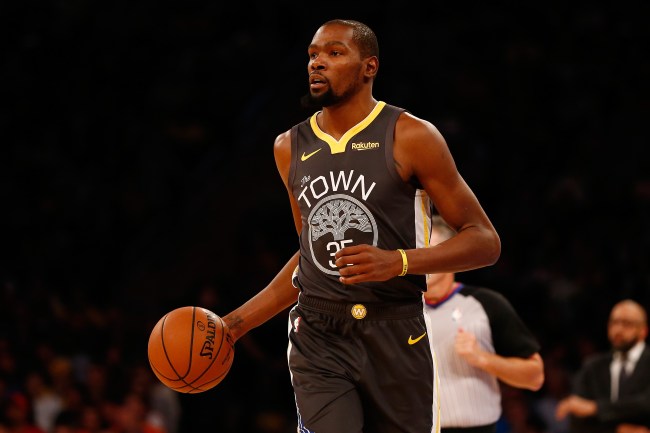 Kevin Durant has an opportunity to change his legacy from front-runner to savior. If he joined the Knicks, that would happen overnight. And that’s exactly what arguably the top 3 player on the planet should want–the chance to transform a perpetually wandering franchise to a contender in the world’s biggest basketball market. To infuse life into a team that posted a league-worst record of 17-65 last season.

And according to a report by ESPN staff writer Ian Bagley, the 30-year-old joining the Knicks is all but a forgone conclusion, according to a large number of both his current and former teammates.

It’s easier to find street parking in Manhattan than it is to find an NBA executive, player or coach who doesn’t think Durant is going to sign with the Knicks in July.

Some of Durant’s former teammates think it’s going to happen, per ESPN sources. Several of his current teammates have told friends that they think it’s going to happen, sources said. Opposing agents believe it’s a fait accompli: “Just a matter of putting pen to paper,” is how one agent of another top free agent in the 2019 free-agent class put it.

Executives believe that Durant will not enter a rebuild situation, so another star to join the Knicks roster isn’t a sweetener, but a necessity. Kyrie Irving has had his trials and tribulations with the Celtics this season and has softened his public declaration to return to Boston next season to claim that he’d check out New York in free agency.

The report also points out that Rich Kleiman, Durant’s manager, business partner and co-founder of his media company, is a huge Knicks fan and those close to Durant suggested to Knicks fans that they should remain calm amid New York’s awful 2018-19 season.

Bagley’s report supports one by Bleacher Report‘s Ric Bucher earlier this month, who said Durant going to the Knicks was pretty much a “done” deal: “From everything I’ve heard, it’s done,” he said. “Yes, he’s leaving… If he so much as gets [the Knicks] into the Conference Finals, he will be beloved there like he never has been at Golden State after 2 Championships.”

And please don’t underestimate Durant’s reaction to a 60 Minutes reporter when asked if Warriors’s players could possibly think of going to another team after their success.

During an interview with @60Minutes, Klay Thompson & Kevin Durant were kinda quiet when asked if they could play for another team after winning so much where they're at pic.twitter.com/D1SdQPaDZW

This summer bout to be lit.