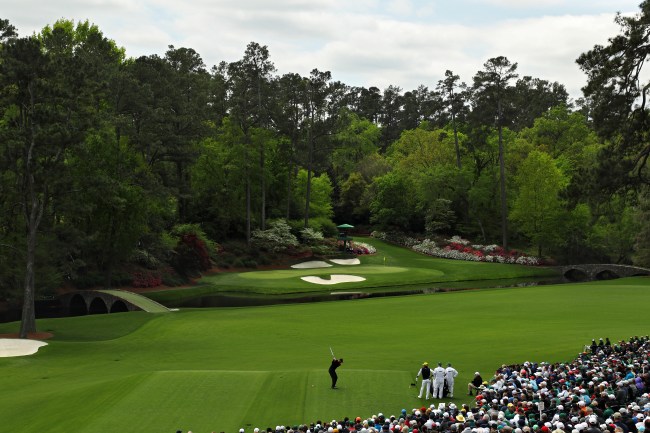 AUGUSTA, GA - APRIL 08: Tiger Woods of the United States plays his first shot from the 12th hole during the final round of the 2018 Masters Tournament at Augusta National Golf Club on April 8, 2018 in Augusta, Georgia. (Photo by Patrick Smith/Getty Images)

GOLF 20/20 and TEConomy Partners released their latest U.S. Golf Economy Report indicating that the sport is trending positively. Direct economic impact derived from the game grew 22%, to $84.1 billion between 2011-2016. Golf facilities are generating more revenue (+15% to $34.4 billion), Topgolf has lifted the performance of alternative facilities (think: driving ranges, indoor facilities) and equipment, apparel and media sales have increased since ‘11 (up to $6 billion). Though the report paints a positive overall image of the industry, it must be noted that the number of golf facilities has declined (-737 to 15,014), new course construction is down (-59% to $210 million) and golf community development still trails ’05 levels ($7.2 billion, down from $11.6 billion).

Howie Long-Short: Golf stocks are far outperforming the S&P YTD; Callaway Golf (ELY) is +20% YTD (to $16.74), Acushnet (GOLF) is +13.75% YTD (to $23.98) and the S&P is -1.45% YTD. While it would be easy to attribute the sales growth to Tiger Woods’ return, both companies have been headed in the right direction for some time; ELY is +74% over the trailing 3 years, while GOLF is +35% since its ’16 IPO. The U.S. Golf Economy Report indicated that the industry’s strongest sales growth was coming from the equipment category, a far more logical reason for ELY & GOLF’s outperformance.

Fan Marino: Mets star Yoenis Cespedes, a career .270 hitter, is hitting below the Mendoza line (.195) in 2018; but, believes he’s identified the problem – a “golf deficiency”. Cespedes, who says he hasn’t hit the links since June, claims the sport helps him to “keep my hands inside and keep watching the ball in order to hit it well.” I’m not buying that excuse. If he hasn’t swung a club since last summer, how did he manage to hit .324 (in 20 games) in spring training? With that said, I do not believe one’s golf swing has any impact on his/her baseball swing.

Ford Performance (F) has announced that it intends on introducing (pending NASCAR approval) its iconic Mustang model to the Monster Energy NASCAR Cup Series in 2019. The “muscle car” would become the 4th model Ford has run in NASCAR’s most prominent series, in the modern era (since ’72); following the Thunderbird, Taurus and Fusion. While the body will be available to Ford Performance teams, on the Cup circuit, for the first time at the 2019 Daytona 500; Ford has been using the model in the Xfinity Series (#2 circuit) since ‘11. Chevrolet also changed its body style earlier this year, introducing the Camaro ZL1 to the Cup Series; a long-time rival of the Mustang.

Howie Long-Short: Ford Motor Company (F) has had a rough start to 2018, with shares down 12% YTD (17% since January 12th). The rising costs of aluminum and steel, thinning margins (5.4% operating margin in ’17, GM – 8.8%, Fiat – 6.4%) and underwhelming sales abroad (particularly China & U.K.) are to blame. Looking for a bright spot? Morgan Stanley says the company’s F-1 pickup franchise alone, could be worth 1.5x the company’s EV. The company will report Q1 earnings later today.

Fan Marino: Ford is having a strong season on the track. 5 of the Top 6 drivers in the Monster Energy Series standings drive a Fusion and the manufacturer has won 4 of the 8 races. As for Chevrolet, Austin Dillon won the 60th running of the Daytona 500 in a Camaro; but, their teams have struggled since.

It’s worth noting that 2 Ford drivers won Xfinity Series Championships driving a Mustang, Ricky Stenhouse Jr. (’11, ’12) and Chris Buescher (’15). Despite their Championships, no one has won more races driving the model than Brad Keselowski; with 17 trips to Victory Lane.