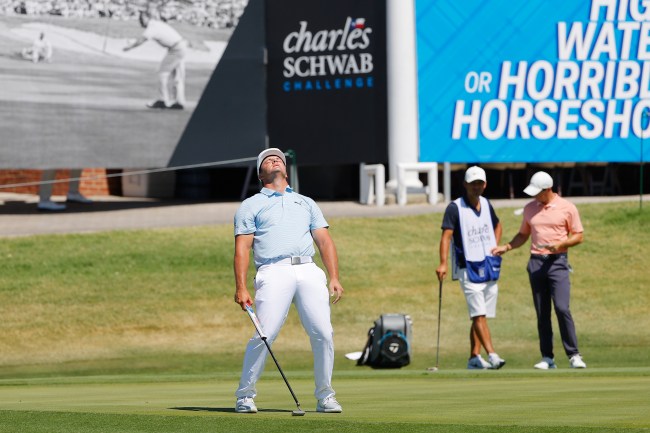 For non-golf fans: Bryson Dechambeau is a pro golfer who is currently transforming his body into a snow plow. Never seen anything like it. From his own instagram:

This is a dude whom a lot of people ridiculed for spritzing his ball with mist, for using geometry tools to read greens, and for bringing whacky science and math into the game of golf. Problem is, he’s really good. You can only write a guy off as batty until his methods start to foster results. Even so, golf is a sport that resists progress and change more than your old, tired basset hound.

Guardians of the old ways, like announcer Colin Montgomerie, are none too thrilled about Bryson’s bulk and resulting power. Here’s what Colin had to say about Bryson’s performance at the Charles Schwab challenge:

“I’m an advocate of what Jack Nicklaus proposes — a tournament ball for professionals, that goes only 80 to 85 per cent as far,” Montgomerie, a top European golfer in the 1990s and 2000s, told the outlet. “The time has come, because we can’t be building courses at 10,000 yards.

First, Bryson finished tied for third. He did not win. Daniel Berger won, and he clocks in at 6’1”, 175. That’s a regular-sized dude. That’s a guy that authorities struggle to find because he’s so normal. He beat Bryson because, well, despite what Colin Montgomerie would have you believe, golf isn’t the METRX World’s Strongest Man. Reading putts and scrambling from bunkers is not akin to keg tossing. You gotta have touch, flexibility, balance, and all that other goodness.

Sure, Bryson is the longest driver on tour. But Rory McIlroy, the #1 player in the world, is third on the list of driving distance, and only an average of 4 yards behind Bryson. How big is Rory? 5’9”, 161. Rory’s put on some muscle too, but mostly in his legs thanks to his Peloton. The reason Rory hits the ball so far is because of his swing speed, athleticism, and flexibility. It’s curious that Colin has nothing to say about that.

The point is, getting huge does not necessarily mean you have a competitive advantage on the golf course. Squatting 450 doesn’t help you with your putting rhythm. Adding extra plates on the bench won’t necessarily translate to judging distance with a wedge.

With that said, let’s get these guys huge. I want a doping tent at major tournaments, where doctors administer HGH and clean and clear doses. I want forehead veins and broken driver shafts. Hell, let’s take it a step further. Turn golf into a robot demolition derby. Let caddies carry bee hives with leaf blower attachments that they can sick on dudes taking too long to putt. For too long, golf has been the sport of overweight, old white men. Maybe some rippling biceps and vascular calves are exactly the imagine makeover the sport needs.