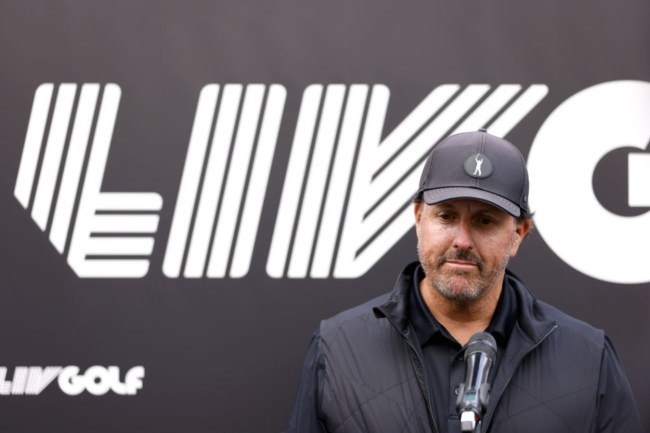 On Thursday, Phil Mickelson played his first competitive round of golf since February in the inaugural LIV Golf Invitational Series event. One would think Lefty making his long-awaited return to golf on the controversial Saudi-backed circuit would be the golf story of the day.

Well, not exactly. Mickelson is involved in the most intriguing golf headline of LIV’s launch day, but it doesn’t have anything to do with the golf he played. Instead, it has to do with a journalist being tossed from his press conference.

Alan Shipnuck is one of the most well-known writers, journalists, and authors in the golf space. He is also the one that revealed Mickelson’s comments about the Saudis being “scary motherf–kers” while calling the PGA Tour “a dictatorship” in mid-February.

Shipnuck was on-site with a media credential for the LIV Golf event on Thursday, but that apparently didn’t get him access to Mickelson’s press conference.

Not long after the first round wrapped up, Shipnuck tweeted that he was “physically removed” from Mickelson’s presser by “a couple of neckless security dudes.” The security guards apparently said they were acting on orders from their boss.

Which boss that is, nobody exactly knows.

Well, a couple of neckless security dudes just physically removed me from Phil Mickelson's press conference, saying they were acting on orders from their boss, whom they refused to name. (Greg Norman? MBS? Al Capone?) Never a dull moment up in here.

Shipnuck explained that Mickelson had just begun speaking before security took him out of the press area.

Outdoor flash area. Yes, Phil had just begun speaking. I saw a couple of iPhones pointed at us but haven't seen any footage.

‘Freedom of the press’ doesn’t appear to apply at the golf tournaments being run and funded by the Saudis. At least not for the press that paints them in a bad light, which Shipnuck isn’t the only one taking that stand against LIV Golf.

UPDATE: Shipnuck sent Greg Norman, the CEO and brain behind LIV Golf, a text about the incident and caught him in a lie.

You cannot make this shit up! I texted Greg Norman before someone sent me this video – I had no idea he was lurking behind me. pic.twitter.com/thgdMlfTAR