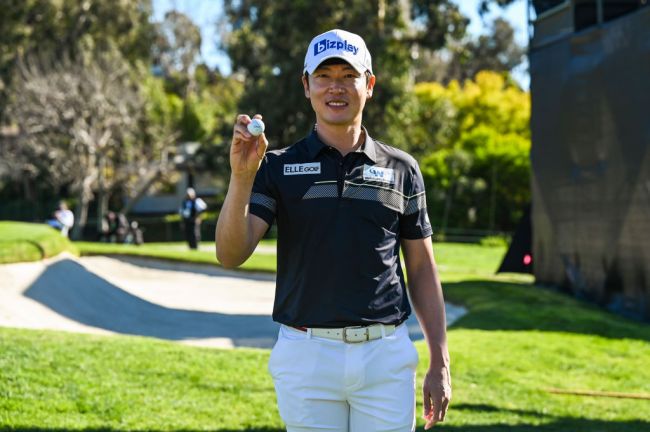 There are cars all over the course at Riviera Country Club this week with the Genesis Invitational in town, but thanks to Tae Hoon Kim, there’s now one less.

The tournament was giving away a Genesis G-80 if anyone hit a hole-in-one on the Par 3 16th. Kim stepped up to the hole playing 168 yards on Thursday with his seven-iron and jarred it to move to 4-under through his first seven holes. Not a bad start to a round to be four deep through seven and a proud owner of a brand-new car, especially for someone in the field on a sponsor’s exemption.

You’ll notice that his reaction to making the ace was almost non-existent, his playing partner literally had to tell him to throw his arms up, but there’s a good reason for his calm demeanor.

First of all, he later admitted that he didn’t see the ball go into the hole, and without fans on the grounds, a delayed reaction is totally understandable. But, what about the fact that he just won a car? Well, it turns out winning cars on the golf course is sort of Kim’s thing, he’s now won three in the past four months.

This past October Kim on a KPGA Tour event at Jack Nicklaus Golf Club Korea and took home a new Genesis GV80. Then, in November, he won the season-long points race on the KPGA and the prize for that was, you guessed it, a Genesis.

Meanwhile, if you or I go out and hits a hole-in-one tomorrow our reward is buying drinks for everyone at the bar.

Kim mentioned after the round that he gave the first two cars to his parents, so maybe this one he’ll hang onto for himself.