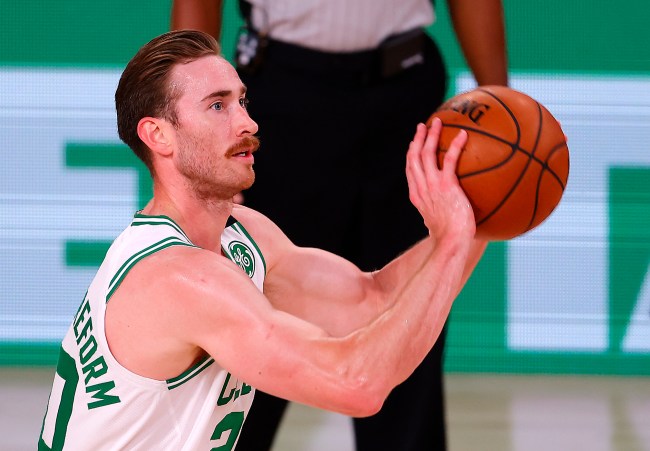 The balls on Gordon Hayward have to be absolutely enormous, guys, because Thursday’s news shows that the guy really is a maverick who loves to gamble, especially on himself. That’s because the shooting guard declined a $34.2 million player option with the Boston Celtics, meaning he’ll become a free agent on Friday. Yes, you read that right: Hayward chose to walk away from a guaranteed salary next NBA season of $34.2 million.

Now, I don’t want to crap all over the guy — after all, he’s an above average NBA player and I’m just a writer writing about said above average NBA player — but, sheesh, what in the hell is Gordon Hayward smoking to think that any team in the league is even going to come close to giving him that kind of money on the open market? Guys… $34.2 F’IN MILLION DOLLARS! I’m legit shocked. Who is this man’s agent, and why do they still have a license? No joke, this might be the dumbest business decision in modern history.

Just because I’m shook by all this, let me give you some stats to, you know, just look over.

Those are Hayward’s stats in three seasons with Boston. Do those look like the numbers of a player who should’ve even had the chance to earn $34.2 million next season? Hell no they don’t! So is Gordon Hayward insane for turning down that player option he had with the Celtics? Hell yes he is! I bet the dude gets (maybe) half of that salary back with his next team. Yeah, that’s how much money the guy could end up losing.

If it seems like I’m shocked, upset, and, well, showing all sorts of emotions, it’s because I am. I don’t know who advised Hayward on this decision, but they shouldn’t be allowed in his quarantine group any longer. Even if the guy hated the city of Boston more than anything else in life, you accepted $34.2 million guaranteed, talk crap about Danny Ainge and how the Celtics’ front office underappreciates you, and, BOOM, you get yourself traded — with that salary! That’s how the game works.

Not for ol’ Gordo, though, who had everyone on Twitter completely amazed at the fact that he refused to take the money.

Hayward to Danny Ainge tomorrow when all Hayward gets are mid level exception offers on the market:pic.twitter.com/A0MLicLCDN

His agent and family when they heard this pic.twitter.com/e3NQs5HaV4

Wow broken foot recovered Hayward opting out of a $34M option? Big balls right here! Guess he got the trading vibes and wanted no part of it. pic.twitter.com/0bwdxyhSvG

Maybe Gordon Hayward’s just a better man than most of us, and, deep down, understands that he didn’t live up to that kind of salary. Kudos to him for being so self-aware if that’s the case. But, man, what a dumb move.

So what might be next for Hayward? Naturally, there are reports that the New York Knicks could be eyeing the shooting guard, with rumors already floating around that the one-time All-Star may find himself in the Big Apple next.

Hayward has indeed opted out of next season's $34.2 million with the Celts and becomes an unrestricted free agent Friday at 6 PM ET

The Knicks are in play …

Somebody please check Gordon Hayward to make sure he’s functioning properly. Because his latest decision to leave $34.2 million on the table makes me think he has a couple wires loose in his head.