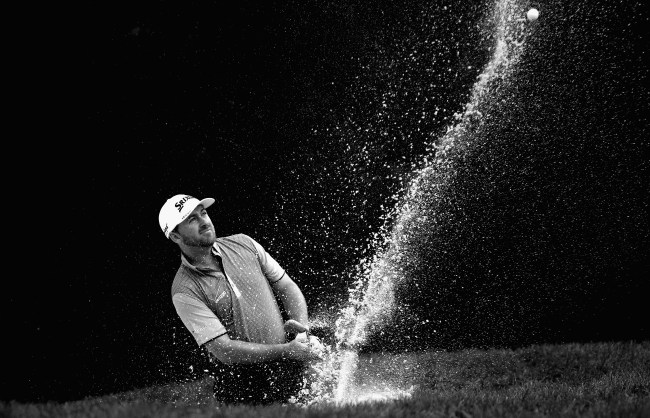 Graeme McDowell was the 2010 U.S. Open champion at Pebble Beach. He’s peaked at #4 in the World Golf Rankings (January-March 2011) but he’s fallen to 175th in the world since then. There are all sorts of ways to qualify for a major tournament in golf (ranking, winning various tournaments, FedEx Cup points, etc) but being ranked 175th in the world is not one of them.

His current world ranking means that the man from Northern Ireland was forced to fly from Paris to Manchester this week to play in a 36-hole qualifier in order to try and qualify for the Open Championship at Carnoustie (July 19-22). Totally unrelated, but my dentist actually played Carnoustie a few weeks ago and relayed to me during my teeth cleaning last week that the course is in great shape.

So…Graeme McDowell’s flying Air France from Paris to Manchester on a Monday to compete in the qualifier on a Tuesday before heading off to the next European Tour event and what happens? He gets to baggage claim in Manchester and Air France has lost his clubs the day before he’s supposed to qualify. This is an absolute nightmare for a pro golfer. The absolute worst case scenario. He has every club in that bag tuned to his exact specifications and POOF, they’re gone:

Need assistance from @airfrance. Flew into Manchester last night from CDG and my golf clubs are untraceable. I have a 36 qualifier tomorrow for @TheOpen and really need my bag. Thanks in advance. #help

Clubs still not on way from Paris. Established that they are in the black hole known as CDG. @airfrance and @AirFranceUK have been very quiet on Twitter lately so no communication. Looking doubtful I will participate tomorrow @TheOpen qualifier.

Terrible time of the year for holiday makers losing bags. I’m certainly not any more important than the next person who has lost a bag, just happens to impact my livelihood this week. Customer service is so frustrating in this case for everyone.

I hear you man. Only 3 spots from 72 decent players and I have another event to get ready for this week, so have to cut my losses and start preparing. https://t.co/L49rE58pQh

Sent this guy @Jmjanaillac an email this morning, who I believe is the @airfrance CEO but got the cream pie. Maybe not a golfer. Frustrating one. Have to start switching my brain to @DDFIrishOpen. @TheOpen spots there also. Still need clubs!!!

He’s supposed to start playing tomorrow morning (they’re 5 hours ahead) and his clubs are still nowhere to be found. Air France isn’t helping him out. And this pro golfer is literally living out his worst nightmare. So, if you’re in a European airport and happen to see some clubs on the Air France baggage carousel going around in circles you might want to contact Graeme McDowell on Twitter.