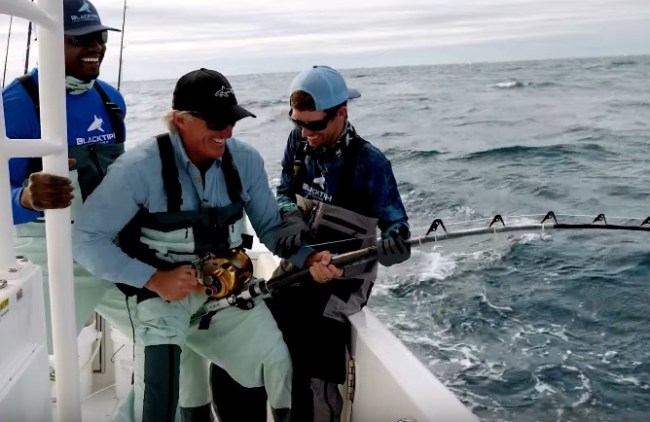 Greg ‘The Shark’ Norman was a legend back in his day. Throughout his career, he had 20 wins on the PGA Tour, 14 wins on the European Tour, and he won the Open Championship Twice.

Norman earned his nickname of ‘The Shark’ with his play at the 1981 Masters which was eventually won by Tom Watson who took home only $60,000 for winning the tournament. Norman was T-1 after the 1st Round that year, T-2 after the 2nd Round, in 3rd after the 3rd Round, and he eventually finished alone in 4th place at -5 for $16,000.

Norman’s a born-and-raised Australian but at this point, he’s lived in Jupiter, Florida for most of his life. He’s an avid fisherman and recently lived up to his nickname ‘The Shark’ when he went out fishing with Josh from BlacktipH, the largest fishing channel on YouTube. They got into some blacktip sharks and a massive Goliath Grouper.

This clip’s a little long so feel free to jump around to find the action:

You have to love rigging up a 20-pound Jack Crevalle, a fish that would put up a hell of a fight on light tackle, and using that to haul in a massive Goliath Grouper. All after a day of hammering the blacktip sharks.

Florida is the official fishing capital of the world even though Venice, Louisiana has given itself that nickname. You can spend the morning crushing sharks, Goliath Grouper, tarpon, bonefish, snook, redfish, and permit in the backcountry and then head out offshore in the afternoon to slam tuna, sailfish, wahoo, and other pelagics.

It’s 100% the healthiest and most diverse fishery in America and I highly suggest everyone out there takes advantage of it with some catch-and-release recreational fishing!