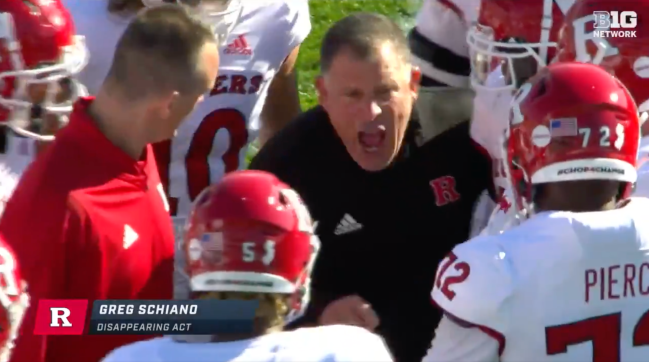 Greg Schiano is the head coach of Rutgers football, but he might be better suited to be a magician. The 55-year-old New Jersey native returned to his home state ahead of the 2020 season and has turned the Scarlet Knights from a perennial basement dweller to a pesky Big Ten foe in a very short period of time.

During Saturday’s game against Northwestern, however, he was nonexistent. Kind of. A video of Schiano has gone viral and it makes absolutely no sense.

In one moment, he is speaking to his team in a huddle. In the next, he moves away from the huddle and the camera follows him.

But Schiano is nowhere to be found. He disappeared.

Upon further investigation, it would appear that Schiano ducked behind his players and simply cannot be seen behind his team’s helmets.

If you look closely, you can see just a liiiiiiiiiiiiittle bit of his head right here: 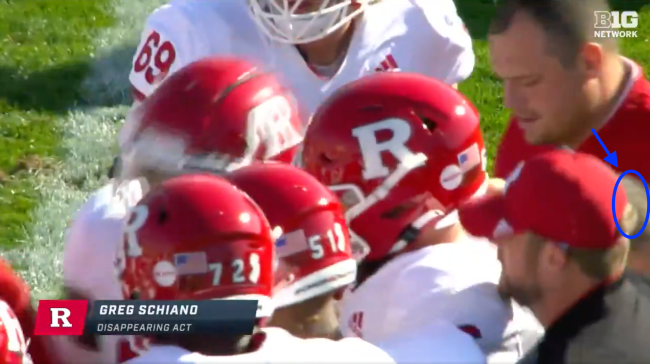 The video of Schiano is not the first time that a Big Ten coach has magically disappeared. Back in 2016, a similar video set the internet ablaze when Michigan State head coach Mark Dantonio was standing on the sidelines and then was nowhere to be found.

Dantonio’s disappearance is even more difficult to figure out, but Schiano’s magic is equally as entertaining.

Rutgers lost to Northweezy by two scores, so Schiano’s vanishing might have been intentional, as he didn’t want to be seen coaching such a poor performance.