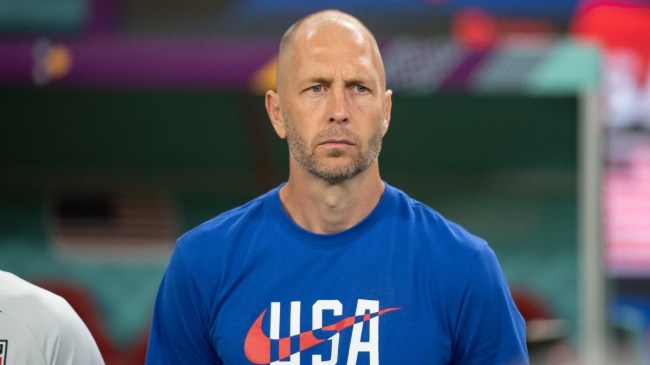 Berhalter has plenty of supporters. But he also has plenty of detractors who do not want to see his contract renewed following the 2022 FIFA World Cup.

Those calls grew louder after Berhalter got in a very public feud with young USMNT star Gio Reyna following the US’s exit from the tournament in Qatar.

But now it appears that one person took their frustrations with Berhalter entirely too far. The USMNT manager, who is technically currently out of contract, sent a tweet on Tuesday outlying a plot to blackmail him surrounding an incident involving him and his longtime wife Rosalind.

In the tweet, Berhalter addresses a domestic dispute that occurred between him and his wife 31 years ago when they were both dating at the age of 18. Berhalter admits to kicking his then-girlfriend in the legs.

It signaled the end of their relationship. He says that despite the authorities not being involved, he informed friends and family of the incident and sought therapy. The two later reconciled and were married. They have four children together as well.

The statement reveals that an investigation found a number of similar incidents targeting members of the USMNT staff. It also stated that no decision has been made about the future of Berhalter’s position.

Fans were stunned by the news.

I don’t care what you think about Berhalter. Basically blackmailing him about an incident from 31 years ago because you don’t like him as a coach is ridiculous. https://t.co/InT2orA4I1

This is an insane story. https://t.co/MhFBmdX9K1

Pretty ridiculous that someone would try and use this against him now!!

Good on Gregg, to come out ahead of this. #USMNT https://t.co/tuCQzLEw4P

From a sporting standpoint, the news comes at an interesting time. Berhalter has neither been formally retained or released. But the USMNT is set to resume play on Jan. 25 in a friendly against Serbia.

The USSF’s statement says that it will make an announcement in the coming days regarding who will manage the team in the late-January friendly matches.